“I've killed nobles before, why should an empress be different? For six months, the city writhed and changed. For six months, I tried to forget what I've done to the Empress and her little girl. Whatever doom was coming, I deserved it, but not yet.”
——Daud

The Knife of Dunwall is the second announced Downloadable Content pack developed by Arkane Studios and published by Bethesda Softworks for Dishonored. Announced on March 13, 2013, it was released on April 16, 2013 worldwide for $9.99 on Windows PC and PlayStation 3 and for 800 Microsoft Points ($10) on Xbox 360.

The Knife of Dunwall centers around Daud, leader of the Assassins and murderer of Empress Jessamine Kaldwin. Seeking redemption for killing the Empress, Daud is given a directive by the Outsider: unravel the mystery behind the name "Delilah." Daud sets out on a journey that includes stops in familiar places (the Whalers' base in the Flooded District) as well as areas of Dunwall not seen in Dishonored's main story (the Legal District and Slaughterhouse Row).

Like Corvo Attano, Daud is imbued with supernatural powers by the Outsider. Some of them are new, like Summon Assassin, which lets Daud call in acolytes for assistance in combat. Others are variations on Corvo's abilities, such as Void Gaze — which highlights runes and bone charms — and Blink, which, when used while standing still, also stops time. Daud also has an array of new gadgets at his disposal, including Chokedust, a substance that dazes enemies, and Arc Mines.

The Knife of Dunwall serves as the first of two DLC add-ons focusing on Daud; Dishonored's final DLC, The Brigmore Witches, completes the arc.

The Knife of Dunwall features a whole new set of achievements.

The Knife of Dunwall begins with a flashback of the Empress's assassination from Daud's point of view. At the moment he stabs the Empress, Daud is pulled into the Void, where he is confronted by the Outsider. The Outsider ambiguously tells Daud that his "story will end soon," but how it ends will depend on whether or not he finds Delilah.

Six months later, Daud receives word of a whaling vessel called the Delilah that has just docked at the Rothwild Slaughterhouse. Daud and his associate Billie Lurk investigate the slaughterhouse for clues. They eventually find out (either by interrogating Bundry Rothwild or by questioning Abigail Ames) that the ship belonged to a Barrister named Arnold Timsh. Timsh sold Rothwild the ship after claiming that "the name was haunting him."

Daud and Billie then make contact with Arnold's niece, Thalia Timsh. Thalia has information on Delilah that she is willing to share, but only if Daud can dispose of Arnold Timsh and retrieve her grandmother's will from his estate. While in the estate, Daud encounters a statue of Delilah, and upon interacting with it, the statue begins to move and talk to Daud. She tells Daud to stop trying to find her, if not for his own good, then for the good of his assassins. Daud is not discouraged and steals the will from the estate archives.

Upon returning the will to Thalia, she tells Daud everything she knows about Delilah. A young baker's apprentice from Dunwall Tower, Delilah met Arnold Timsh and convinced him to make her the benefactor of his mother's will. Shortly after, Delilah disappeared, and Arnold became haunted by her image. One night while attending a mock seance at the Boyle Mansion, Arnold and Thalia accidentally summoned Delilah, who was painting Daud's name on a canvas.

Upon returning to the Flooded District, Daud finds that the Whalers' base has been overrun by Overseers attempting to eradicate them. Daud is tasked with repelling the raid by eliminating their commander, Overseer Hume, and freeing the captured Assassins.

How this mission plays out is determined by Daud's chaos level.

When entering the Flooded District, Daud is greeted by a Novice Assassin who tells him of the Overseer attack. Daud repels the Overseers before ordering his Whalers to execute or capture the remaining Overseers. Billie Lurk arrives, claiming to have been pinned down by Overseers. Suddenly, Delilah appears on a nearby rooftop, taunting Daud and saying that her coven of witches will destroy Daud and his assassins.

Billie then reveals that she has been working with Delilah's coven in attempt to usurp Daud as leader of the Assassins. Billie and Daud fight until Billie becomes mortally wounded by Daud's hand. Daud can then execute Billie or tranquilize her with a sleep dart. The story ends with narration from the Outsider, and an image of Corvo sneaking up to kill Daud from behind as he is making a recording.

When entering the Flooded District, Daud is greeted by Billie. She tells Daud about the Overseer's attack and assists him in retaking the assassin base. Once the district is secured, Billie admits to Daud that she was the one who revealed the location of the base, and that she gave the information to Delilah. Believing that Daud was too shaken by the Empress's death to lead the Whalers any longer, she teamed up with Delilah to usurp him. However, after observing Daud's behavior during the hunt for Delilah, Billie realizes that she struck too early and that Daud still possesses the same skill as always. Delilah then reveals herself to the Whalers and curses Billie for double-crossing her, before issuing a final threat to both Daud and Billie and vanishing.

Claiming that Daud deserves better than a dishonorable death at her hands, Billie surrenders her life to him and leaves her fate in his hands. Daud can then choose to kill Billie, or tell her to flee Dunwall and never return. If Daud chooses to spare her, the epilogue shows Billie on an outbound smuggler ship as she contemplates finding a new use for her skills. It also ends with the image of Corvo approaching Daud as Daud greets him sitting in his chair. If Daud chooses to execute Billie, the Outsider tells Daud that Billie lived as Daud taught her and died without regret, before ending with an image of Daud standing next to the dead Empress. 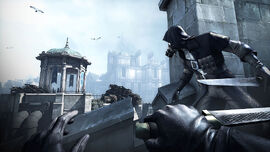 The assassination of the Empress from a different perspective. 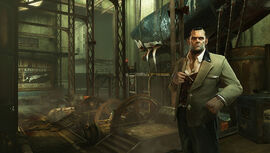 A scene inside the Rothwild Slaughterhouse. 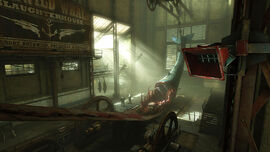 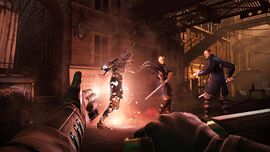 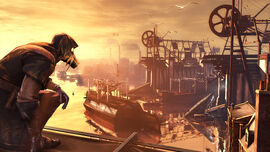 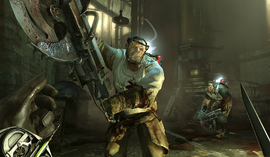 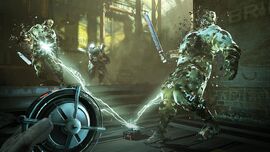 Daud using an arc mine on the butchers. 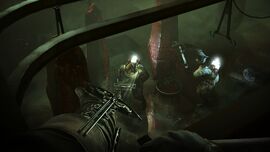 Daud using his wristbow on a group of butchers. 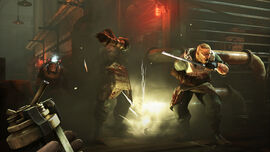 Daud using chokedust on the butchers. 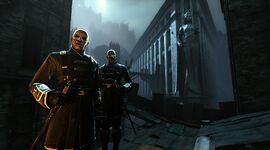