Included within the Special Edition of Dishonored is a 78-card tarot deck themed on the game, which is usable for playing the Game of Nancy, as well as for divination.

While Arkane Studios did not provide a companion book or online information to accompany the deck and explain its occult symbolism for divination purposes, Harvey Smith, Co-Creative Director of Dishonored, stated on Twitter:

“That's the kind of thing the community would have to do. We would pay attention to what the community devised. We'd look at it after the fact. Otherwise, too much work for already slammed people. Yeah, we'd love to see it, to give thoughts when we could, etc.”
——Harvey Smith.

A set of updated cards was released with the Game of the Year Edition of Dishonored, available to those who pre-ordered the game from GameStop. They feature characters from The Knife of Dunwall and The Brigmore Witches, such as Lizzy Stride, Billie Lurk, and Delilah Copperspoon. It also contains updated character classes, such as the Butchers and the Brigmore Witches.

I - Judgement: Emily Kaldwin, daughter of the late Empress and rightful heir to the throne of Gristol.

III - The Man on Stilts: One of the tallboys, heavily armored and chemically enhanced members of the City Watch that stalk the streets of Dunwall on their stilts.

V - The Witch: Vera Moray, now known as Granny Rags, who is blind, mad and deceitful, and not quite as harmless as one might think.

VI - The Weeper: Victims of the plague in its last stage, weepers are senseless horrors that roam the streets of Dunwall, abandoned by society.

VIII - Regret: Daud, leader of a group of assassins and the one responsible for killing the Empress Jessamine Kaldwin, "blessed" with dark powers by the Outsider.

X - The Twins: The Pendleton twins, Custis and Morgan, slavers, sadists and corrupt members of parliament who support the Lord Regent.

XI - The Hermit: Piero Joplin, a socially inept genius, alchemist, weaponsmith and member of the Loyalists who oppose the Lord Regent.

XIII - Cruelty: The Royal Interrogator, a sadistic torturer with a dark passion and an even darker secret.

XIV - The Governess: Callista Curnow, a member of the Loyalists and a caring tutor to Emily Kaldwin.

XV - Nobility: Treavor Pendleton, the younger brother of the malicious Pendleton twins, as well as a leading member of the Loyalists.

XVI - The High Overseer: Thaddeus Campbell, a corrupt supporter of the Lord Regent, and Teague Martin, a leading member of the Loyalists.

XVII - The Drowned Man: Admiral Farley Havelock, astute military mind and leader of the Loyalists who will go to great lengths to see his work done.

XVIII - The Lord Regent: Hiram Burrows, the former Royal Spymaster for the Empress and instigator of her assassination, who now rules Gristol with an iron first.

XIX - The Empress: Jessamine Kaldwin, beloved Empress of the Empire of the Isles, who died at the hands of the assassin Daud in order to enable the coup d'état of Hiram Burrows.

XXI - Death: Corvo Attano, once Lord Protector and bodyguard of Empress Jessamine Kaldwin, who was framed for her murder by Hiram Burrows. Freed by the Loyalists, he now treads a thin line between vengeance and justice.

The Outsider: A timeless being of magic and mystery that takes interest in select humans, including Corvo Attano.

The Suit of Rats - A suit of 14 cards, represented by rats.

The Suit of Swords - A suit of 14 cards, represented by swords.

The Suit of Pistols - A suit of 14 cards, represented by pistols.

The Suit of Skulls - A suit of 14 cards, represented by skulls.

Each suit contains four face cards (King, Queen, Commoner, and Jack) and ten numbered cards in descending order from 10 to 1.

While not specifically designed to standards of modern tarot decks, the cards within the Dishonored Tarot deck can theoretically be linked to their Arcana counterparts by using their representative character and personalities, compared with the meanings given to certain tarot cards.

There are multiple possibilities regarding how the Dishonored tarot deck aligns with the standard tarot deck, which can be found here.

III. The Man on Stilts - Tallboy

XX. The World - Empire of the Isles

Game of the Year Edition

XX. The World - Empire of the Isles 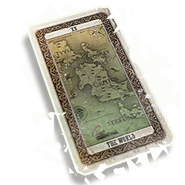 The World card in The Knife of Dunwall.

An abandoned game of Nancy at Coldridge Prison.