This page is about the mission The Flooded District. You may be looking for the location or the book.

The Flooded District is the seventh mission in Dishonored. Corvo Attano, betrayed by the Loyalist Conspiracy and captured by the Whalers, must escape and return to the Hound Pits Pub.

There are many ways to navigate the mission, with only a few places that Corvo is required to visit. Prior to the mission, his gear is tossed to the bottom of the Greaves Refinery by Daud; Corvo can choose to retrieve his gear, or go on without it.

Corvo will awaken to find himself in a large hole. There are a few methods he can use to escape:

Upon escaping the hole, Corvo will find a few vials of elixir, some food, an Assassins' Sword, and an Overseers' Sabre. On the level above, assassins will be guarding the exit to the building. Corvo can leave the building in many different ways:

From here, Corvo can choose to either go straight to Daud or to retrieve his gear from the refinery. To get to Central Rudshore, Corvo can blink or climb to the nearby bridge and sneak past the assassin guards at the entrance to the Rail Station.

Note that to gain access to the Rail Station, Corvo must find the key. Several assassins carry it, and it is also found in a side room nearby.

If Corvo wants to go to the refinery, he can choose to go one of two ways:

The first route involves climbing the bridge and entering the building opposite the entrance to the train station. Corvo can do this by blinking up to the roof. Several river krusts can be found here, and Corvo can pick up useful weapons, such as pistols, from the various Overseer corpses scattered around the area.

After Corvo leaves through the double doors, he can blink past the fence and into the refinery.

Corvo can also choose to go past the bridge in the waterfront. Ahead, he will find a colony of river krusts and various corpses. There are also a few abandoned apartments, one which contains a weeper. Weepers also roam the streets ahead, and Corvo must pass them to get to the door leading to the refinery.

The next area is an abandoned apartment from which Corvo can blink across to the refinery. There are more weepers below, but they can be easily avoided.

To get to the actual refinery building, Corvo must lower the stairway attached to the wall. He can do this by putting a whale oil tank in the power receptacle in the control room. By pulling a switch, he can lower the stairs. Note that this will release a rat swarm.

Once Corvo heads up the stairs, three assassins can be heard talking about their search for him (the details of which will differ according to Corvo's chaos level for the mission) before vanishing. Corvo can then enter the refinery.

In order to get to the area below, Corvo must power up the bridge with a whale oil tank. A filling station can be found nearby, but Corvo must climb into a caged area by breaking the wood above the bars to get an empty tank. Once the tank is filled and inserted, the bridge will lower, and Corvo can climb the chain down into the refinery.

There will be four weepers around Corvo's gear in high chaos, but only one in low chaos. The box can be found near a grate, and once Corvo retrieves his equipment, he can leave by turning a wheel to open a metal door nearby.

Thereafter, there are noticeably more guards when Corvo returns to the Rudshore Waterfront, though they only watch the roofs rather than the street.

The Rail Station leads to Central Rudshore, where Daud's hideout at the Chamber of Commerce Building can be found. Many assassins guard the area, and a note found near the refinery will tell Corvo to avoid the bridge, as it is being watched.

There are many ways to navigate the area, but Corvo can enter the commerce building in one of two ways:

Corvo can choose to go through the front entrance, which is an open window attached to the bridge. Many assassins guard it, and the area is very open. Inside the building, Corvo must pass two more assassins in the hallway and then two assassins in the training area. Then, he can blink up to the next level. If he enters the library, he will find another assassin guard, but the hall right outside Daud's office will be clear, unless there is reason to investigate the area.

Corvo can also enter through the back by climbing a nearby abandoned building. This can be achieved from the bridge by blinking up onto a broken brick wall and then to the building. From there, Corvo will have to pass a few assassins guarding the area, but this route will take Corvo directly to Daud's office.

When Corvo approaches Daud's quarters, an assassin will appear to inform Daud of Corvo's disappearance. The assassin's explanation will reflect Corvo's actions in the area; if he has not been detected, the assassin will comment how nobody has seen him, and Daud tells him to "deal with the sentries as [he] sees fit."

Corvo can duel with Daud by walking straight to him. In low chaos Daud will command his assassins to leave, stating "I have to do this alone". In high chaos he will urge them to attack Corvo. Regardless of chaos Daud will use Bend Time during battle, frequently leaving any assassin unable to attack as they are not immune to its effect. After his defeat, he will admit that he is the one who killed the Empress, and that he regrets it deeply. He then will ask Corvo to determine his fate. He will disappear if Corvo decides to spare his life.

Alternatively, Corvo can choose not to confront Daud at all, and instead steal the key from his desk and leave. To accomplish the "send a message" optional quest, Corvo has to pickpocket Daud, or knock him out with the choke maneuver. This method is best accomplished through liberal use of Bend Time (effective on Daud's sentries) and Blink. Knocking out any assassins in the room without being spotted will allow Corvo to sneak up behind Daud, where he can be pickpocketed or knocked out. Choosing this method counts as sparing Daud, and acts as the de facto non-lethal elimination for the mission.

After taking Daud's key, Corvo can make his way down to the tunnel leading to the Rudshore Gate.

Immediately after Corvo escapes the assassins' base, he will enter a slum. He emerges from the sewers into a large dumping ground for corpses of those slain by the plague. Rats are scurrying about and Corvo needs to make it to higher ground. There are many survivors in the area, the first of which he encounters is a nobleman and a dying man. They are non-hostile. The side objective Creating a Safe Haven is available here in low chaos.

A rune is close to this area, located on the roof of one of a series of apartment buildings. Corvo can find it by going through the apartments, including one inhabited by a non-hostile survivor named Alfa.

Corvo can reach the Rudshore Gate, leading out of the Flooded District, in a few different ways.

Talking with Alfa reveals one of the ways Corvo can escape the area: riding atop the large corpse carts that frequent the area. She will walk over and open a set of double doors overlooking the dumping ground. To entirely bypass the tallboys guarding the area outside the gate, Corvo can make use of the large trains. To do this, he must make his way through a series of abandoned apartments up to the roof of a building located near the elevated tracks. When a train passes by, after it has dumped the bodies into the river, Corvo can ride it past the tallboys. However, he must jump from the train before reaching the wall of light. He can choose to either disable or rewire the wall. The power source is located right next to the tracks.

Doing this, however, completely bypasses the survivors and the looters, resulting in Corvo being unable to acquire the Looters' equipment or aid in the survivors' rescue if played on low chaos.

Corvo can also put a whale oil tank - located in the looters' hideout - in the power source for a floodlight near the tenement buildings. Upon the light's activation, the tallboys will leave their patrol routes and proceed to attack the buildings, killing anyone inside. Corvo can use this opportunity to cross the open area.

Another way to get to the gate is to sneak through the abandoned buildings on the left side of the area or to attack the tallboys directly.

Corvo will have to deal with one or two more tallboys, depending on chaos, after passing the first wall of light. He can get past them by climbing through an opening above the door to the next area, or he can drop down and pass through the door.

After bypassing the wall of light and tallboys guarding the district exit, Corvo will come upon a building with an entrance barred by wooden planks. Corvo can break the planks, but several weepers down the street will rush toward the sound. Alternatively, Corvo can access the building to the left by climbing through a window.

On high chaos, Corvo will run into more weepers upon leaving the building. Then, he must make his way down into the sewers through a hatch in the ground.

From there, he will have to pass by several river krusts. Using sticky grenades makes this task considerably easier, as many river krusts are growing from the walls and ceilings.

Corvo will then run into a Bottle Street thug. If Corvo previously interacted with Granny Rags and Slackjaw, the thug will tell him that he needs Slackjaw's key to get into the next area. If not, then the gate to the sewers will be open. After getting the key from Granny Rags, Corvo can enter the back room, where he will find an Outsider Shrine and a hole in the floor covered by wooden boards. From there he can break the wood and jump into the water. The current will quickly take him back to the sewer gate.

In the sewers beneath the Old Port District, Corvo will come upon a small settlement. In low chaos, its members are plague survivors; in high chaos, they are weepers. Once he passes this area, he will have to deal with a few more river krusts before finding the exit.

Daud takes Corvo's gear.
Boards break.png
Corvo breaks the door to his prison with a brick.

The entrance to the Greaves Refinery.

The stairs to the refinery building moving to the "up" position.

The stairs leading into the Greaves Refinery.

The drawbridge inside the refinery building.
Campbellweeper04.png
Weeper Campbell.

An Overseer crawls on the ground.
Screens02 flooded district.png
The area outside Central Rudshore.

A door leading to Central Rudshore.

The training room at Daud's Hideout.

A portrait of the Lord Regent, stabbed with an assassin's blade.

Daud after being defeated by Corvo.

Daud, being grabbed by Corvo.

A map in Daud's Hideout showing the positions of the Whalers at Dunwall Tower during the Empress's assassination.
Aristocrat n survivor.png
An aristocrat helps a dying plague victim. 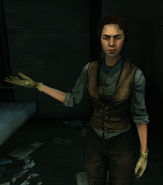 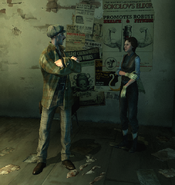 Blake and his sister, both survivors. 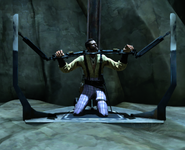 Granny's cameo on her bed. 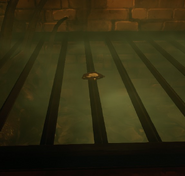 The Outsider as he appears at Granny's shrine 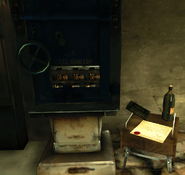