Eminent Domain is the second mission of The Knife of Dunwall DLC.

Delilah once painted portraits for Barrister Arnold Timsh, a corrupt aristocrat who uses his legal powers to evict families from their homes and claim property for the Lord Regent, based on false accusations of plague. Barrister Timsh's niece, Thalia, hates him. She has promised to help you locate Delilah, for a price. Meet with Thalia to find out what she knows.

The mission begins in the sewers at the district harbor, where Daud has a short briefing with Billie Lurk. Daud must seek out their informant, Thalia Timsh, who has information about Delilah. He is to meet her in Treaver's Close, an alley marked by three whitewashed skulls. A set of stairs outside the sewers lead up to the harbor proper, where an officer and a lower guard are on patrol, regularly looking down to the sea. After neutralizing or bypassing them, Daud reaches a road leading to a heavily-guarded city square between a demolished bridge and a wall of light. If Daud purchases the Whale Oil Delivery favor at the beginning of the mission, he can shoot down the loudspeaker by the gate, causing all the guards to gather at the explosion site, and then shoot the whale oil tanks to eliminate all of the guards at once. Alternatively, the guards can also be taken out individually if stealth is preferred.

After bypassing the wall of light, Daud will find a street before him, and a small alley to the right. The path to the right leads directly to a backyard where Thalia Timsh is being held captive by members of the Hatters - she tells them to leave, saying that Daud will kill them when he comes to rescue her, which they laugh off. Daud must neutralize them to get to Thalia.

Prior to reaching the Hatters, there is an upstairs apartment to the right that contains an empty Outsider shrine.

After talking to Thalia, Daud receives his mission: go to the Legal District, infiltrate the Timsh Estate, and steal her uncle's will. There is a locked gate blocking the district's single point of access, so it is necessary to get the key. Its location depends on Daud's chaos level during the previous mission:

After retrieving the key, head down the narrow alley leading to the gate to the Legal District, and enter the next map.

After Daud enters the district proper, Billie appears, reminding him that they have been doing reconnaissance on Timsh for some time and that an Assassin outpost is set up on a building across from the estate. The alley entrance to the Legal District leads to a wall of light blocking access to Legal Plaza. Jump or blink to the rooftops overhead.

Atop the buildings to the right of the alley, Billie can be found hiding behind a billboard, along with a supply cache, two maps, a key to the estate, and a set of reconnaissance notes. Billie comments on Timsh's location, saying on which floor of the estate he can be found while he waits for General Turnbull to arrive.

To the left of the alley are a set of condemned apartments, which can grant Daud balcony access to the estate; they are also the location of the supplies needed for the mission's nonlethal elimination, a hidden rune, and a functional Outsider shrine. 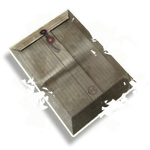 There are three easily accessible entrances to the Estate: the third-floor balcony accessible from Apartment 10, a back door leading to a cellar, and the estate's front door. Timsh's mother's will is kept in a locked chest in his office on the third floor or on the first floor in one of the lawyers' offices. To complete the mission, Daud must retrieve the chest key from Timsh, who carries it at all times,[1] to reach the will. This task can be accomplished lethally or non-lethally, before or after Daud neutralizes Timsh.

After completing the elimination, Daud can access the Legal District Waterfront through a door in Apartment 10, which exits onto the rooftops. He can then find Thalia on the docks and deliver the will to her, and she will reveal what she knows about Delilah. 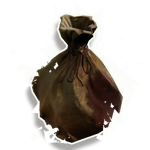 After speaking with Billie Lurk at the entrance to the Legal District, Daud can find a building with a second-story balcony to his immediate right. Blink onto the balcony, and enter. The floor is partially destroyed, allowing access to the ground level.

There, Daud encounters Roland, a noble who has sworn vengeance against Timsh for the wrongful seizure of his property. He instructs Daud to enter his condemned apartment to retrieve a notebook, which contains a full breakdown of his revenge plot against the barrister. As he was captured by a guard named Simmons before carrying out the plan, he asks Daud to do it in his stead.

Inside the apartment are three items: Roland's notebook, a key to Apartment 10, and a forged document calling for the seizure of Timsh's property. Daud can retrieve an odorous sack from Apartment 10 to place in the ventilation system of Timsh's Estate.

Before doing so, however, he has the option to switch a letter of immunity Timsh carries on his person with the forged seizure document. (This task simply requires Daud to pickpocket the immunity letter.) Doing so will cause Timsh to show the seizure document to General Turnbull upon the man's arrival at the estate, neutralizing the target.

Timsh can also be sniped with a sleep dart while Daud is with Billie Lurk on the rooftop. Timed correctly, the guards inside will not notice, and Daud can blink to the balcony and carry the Barrister's body away without having to deal with any guards.

The sewers at the beginning of the level.

Billie chokes out a guard.
Ed32.png
The first guarded area in Daud's mission.

A train runs by Daud on elevated tracks.

The street near the Legal District.

Treaver's Close, where Daud is scheduled to meet Thalia Timsh.
Hattertimsh01.png
Daud spies on Thalia as she is taken captive by the Hatters.
Ed27.png
Daud saves Thalia from the Hatters.

Two hatters on the roof, waiting for their signal.
Ed30.png
Daud fights two hatters on a roof.
Ed26.png
Daud speaks to Thalia Timsh.

The entrance to the Legal District.

Roland waits at a table.

Billie overlooks Legal Plaza.
Eminent domain01.png
An arrow heads toward Timsh as Daud snipes him with Billie Lurk Watching.
Ed21.png
Supplies for Daud on the roof of a building.
Ed07.png
Daud fights a Lower Watch Guard and a soldier. 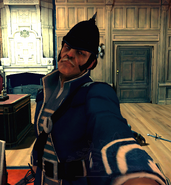 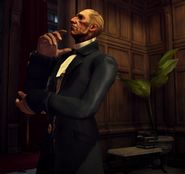 Timsh and Melissa the maid.

A deck of tarot cards.