"You see, I'm an apprentice too, but my mistress also has her own mistress that we all serve. Her name is Delilah Copperspoon."
—The unknown witch conversing with Martha Cottings.

The Wyrmwood Witch is the unnamed antagonist introduced in the first issue of Dishonored: The Wyrmwood Deceit, and resides in a mansion within the city of Dunwall.

The witch is a member of the Brigmore Witches. Her actual ranking within the coven is unknown, as she refers to herself as an apprentice to her mistress who serves Delilah Copperspoon. She doesn't display any of the typical supernatural abilities of the coven, such as Blink or Thorns. Despite this, unlike others in the coven, she has the ability to use painting-based magic. She can turn painted images into living beings, such as the Painting Creature, as well as change a human being's mind through her painting.

By 1850, the Wyrmwood Witch started participating in a smuggling operation of contraband weapons with some of Dunwall's criminal organizations, including the Roaring Boys and the Dead Eels. She observes the situation from her mansion near Wyrmwood Way, where she is attended to by her servant Griz who merely refers to her as "his mistress".

In 1850, Griz reports to the witch the altercation of the City Watch with the Roaring Boys gang over the Old Port District. He also reports that during his intervention, the Royal Protector Corvo Attano met his nephew Milo Ridpath. The Wyrmwood Witch comments that this lure will give her ample time to finish her work.

In Wyrmwood Way, the witch had Titus Grindle killed in his shop to cover her tracks and left a painting creature has trap. Watch Officer Cottings ends in the shop after following a lead on the contraband operation and is assaulted by the creature, destroying it in the process. Meanwhile Corvo follows the boy's tracks and confronts one of the witch's men, Broken Tom, physically enhanced by both technology and bonecharms.

Cottings takes the witch's mark from the painting to Esmeralda Duggins, an old woman incarcerated for witchcraft at Coldridge Prison. The blind witch gives the City Watch officer an address which turns out to have been trapped as well. Sly Harold and Dapper Rodney observes the incident and intends on reporting Esmeralda's betrayal to the Wyrmwood Witch. However they chose to tail and eliminate Cottings first as she might interfere in their plans, and end up ambushed by her instead.

Meanwhile, the Wyrmwood Witch is getting another report from Griz. Their man, Broken Tom, is getting impatient over killing Corvo Attano, their real target. She insists on following her mistress's instructions, knowing that Corvo must be given hope to be made vulnerable. She then uncovers her painting from which she created Corvo's assumed nephew, expressing pride in her craft.

Cottings uncovers from the Roaring Boys' leaders that the witch was getting bonecharms in exchange for new-made contraband weapons for Dunwall's gangs. The gangs would in turn divert the City Watch long enough for the witch to kill Corvo Attano. Cottings, injured from her ambush, limps back to Wyrmwood Way with the bonecharm to find the witch. She is captured and brought to the witch's manor by Griz, on request of his mistress.

After Cottings wakes up, the Wyrmwood Witch reveals to her her affiliation to Delilah's coven, who was "restored to the world", and that they need Corvo Attano dead for much bigger plans. She now intends to change Cottings into a murderer through her painting skills, as another way to get at Corvo. The Watch Officer realizes the witches' plan aims at the Empress, Emily Kaldwin, and with one last effort throws a knife at the witch. Griz protects her but the knife ruptures his oil lamp, which provokes an explosion, killing both the Wyrmwood Witch and him.

The Wyrmwood Witch on a cover.

The Wyrmwood Witch and Griz.

The witch and Griz discuss Corvo.

The mansion of the witch. 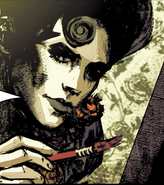 The witch "creating" a new painting.
Add a photo to this gallery
Retrieved from "https://dishonored.fandom.com/wiki/Wyrmwood_Witch?oldid=163743"
Community content is available under CC-BY-SA unless otherwise noted.