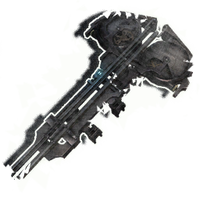 The wristbow is a polyvalent, silent and concealed ranged weapon. It is favored by thugs and assassins in opposition to regular crossbows but performs mostly the same. Some Bone Charms can affect one's use of wristbow or opponents'.

Wristbows are first seen used by Daud and his Whalers in Dunwall in 1837. Crafted from the finest materials, this mechanical device is powered by a small amount of whale oil and can launch wristbow bolts, sleep darts and explosive bolts while remaining concealed in their sleeves.

Warfare Overseers were able to seize some of them and thought of using them in combat. However their models proved lacking in accuracy and range in contrast of the Whalers', and so they kept to pistols and sabers.[1]

In 1851, the new Whalers gang under Galia Fleet and Zhukov adopted again wristbows as their choice of ranged weapon.[2]

By 1852, the Howlers in Karnaca use a simpler version of wristbows attached to their arms, powered by a small battery and launching bolts with a spring. These models are crudely crafted, with for example the battery made out of a bottle of Orbon Rum. Their howling bolts, in addition to regular bolts, give them an edge during fights by disorienting their enemies.

With this upgrade, the wristbow becomes much more accurate, allowing for more precise targeting.

This upgrade makes wristbow bolts travel faster, effectively increasing their range and their accuracy at range.

The Wristbow Reload upgrade reduces the reload time of the wristbow by a considerable amount, allowing Daud to shoot multiple enemies in a small span of time, or to quickly change between the type of bolt currently loaded.

Daud uses his wrisbow on an enemy.

Daud uses his wristbow to kill a Butcher.

Daud attaching his wristbow to his arm.

Daud shooting an Officer in the head.

Daud shoots an Officer off a ledge.

Concept art of the Howlers' wristbows.