The known world is the realm of existence in which the Dishonored franchise takes place. It has yet to be given an official name, having only been referenced as "the world" in various texts and such.

The natural philosopher Anton Sokolov theorizes that the world of men, as well as other celestial bodies, exists in the chaotic sea of the cosmos, swirling in orbit around an ever-devouring "hungry nexus". He has suggested that stars serve as guide points in the darkness of space, and that the world of men is constantly drifting towards the aforementioned vacuum.[1][2]

According to Harvey Smith, the Abbey of the Everyman holds an equivalent belief similar to that of Sokolov's studies, pertaining to the structure of the world. Additionally, the Abbey is said to believe that all of creation originates from the Void: "The Void issued forth the worlds and stars, swirling around that great, birthing abyss."[3] This mimics many real-world creation-myths that postulate habitable order having been extracted from the precosmogonic chaos.

From this, it can be concluded that the overall structure of the world, as theorized by Sokolov, is that of a swirl, where all celestial bodies created in the chaotic mire of existence slowly deviate towards a devouring center.

Though the overall design of the physical world is strongly reminiscent of real world Earth, the world of Dishonored is indeed a starkly different place. A handful of territories have been revealed, thus far, to comprise the landmasses of the world: the Isles and the Pandyssian Continent.[4] The ocean of the world (simply dubbed "the Ocean") is said to be well-nigh impenetrable and the distant wild continents have brought about the concentration of civilization on the Isles.[5]

The Isles is the collective name for a clustered array of island nations located deep within the sea. An imperial government called the Empire of the Isles has overseen the Isles in recent years, but all of its constituent nations have managed to maintain a significant degree of autonomy, regardless.

The Pandyssian Continent is an uncharted land composed of desert and jungle stretches.[5] The civilization of Pandyssia is thought to be largely primitive and heretical, in contrast to that of the Isles. While attempts to explore the continent have been made by people of the Isles, efforts to do so are arduous, due to the distance involved. Only further halting exploration are a volatile ecosystem and inhospitable terrain, which have in conjunction mostly thwarted colonization of Pandyssia.[6]

With the vastness of the world's sea and treacherousness of the distant Pandyssian Continent, civilization has found itself mostly isolated on the island nations of the Isles. Though some people of the Isles believe that Pandyssian civilization is nonexistent, it is said that, at minimum, trader and merchant cultures likely exist on the utmost fringes of the landmass.[5]

Main article: Abbey of the Everyman

One of the most dominant religions in the Isles is the Abbey of the Everyman. Lacking a deity, they center around their Seven Strictures and believe that "the universe is unknowably vast and swarming with all manner of dangerous spirits and forces, most of which are hostile to man's existence".[7] As such, the Outsider and all who involve themselves with the occult are their enemies, as well as practitioners of other religions.

There do exist cults who worship, in particular, the Outsider, or more generally, the Void entity they have come to know.[8] However, most of these sects have been purged by the Abbey, and as such, are few and far between.[9]

The most preeminent marking of time in the world is dictated by a calendar created by the people of the Isles. It consists of 13 months with 28 days each, in total 364 days, as well as an indeterminate period which follows, named the Fugue Feast. A new year only begins once the astronomical clock is officially reset by the High Overseer of the Abbey of the Everyman.[10]

"There are forces in the world and beyond the world, great forces that men call magic..."
—The Outsider

In the world exists supernatural forces, or magic, that can be manipulated by gifted individuals. Humans bearing the Outsider's Mark are able to utilize various supernatural abilities with advanced proficiency, but only very few of their ilk are chosen by the Outsider. Bone charms and runes are employed to further upgrade and complement supernatural forces used by men, respectively. Limits are placed on how many times a magic user can wield these arcane powers, however; the depletion of a user's mana brings about the temporary termination of their supernatural capabilities.

Being marked by the Outsider is not a prerequisite to harnessing the great forces of magic. There are others in the world who are capable of using magic through alternative means, granted their abilities are typically more specialized and less varied.

"This place is the end of all things. And the beginning."
—The Heart

Beyond the world of men exists an alternate, parallel dimension called the Void, where the Outsider resides and magic originates.[11] It appears to be closely intertwined with the world of men; events that take place within the world often times appear as still scenes within the dimension. Various means, both abstract and direct, can be used to visit the Void from the physical world, from dreaming to portal traveling.

One purpose of the Void alluded to by the Heart is that of an afterlife realm.[11] While those who wield the powers of the dark arts are doomed to drift indefinitely in the Void, peaceful spirits of the world are rewarded with non-existence.[12]

It has been heavily implied that the Void will, in time, devour the known world.[1] 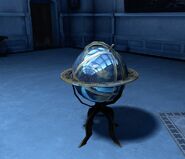 A globe showing the Empire of Isles.

The same globe from the other side, showing the Pandyssian continent.

An old version of the world map, with an incorrect calendar.