Small windmills can be disabled via a maintenance panel, which in turn is accessed by small elevated platform. Alternatively, the blades can be destroyed with an explosion. They can also be temporarily overcharged using Windblast, which will overcharge walls of light for short periods. An overcharged wall of light becomes unstable and releases electric discharges to every neaby objects and living creatures whenever it electrocutes something. Interestingly, the dust storms in Dust District don't overcharge windmills. 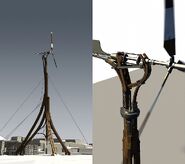 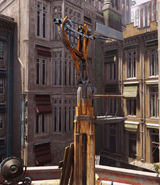 Corvo shooting a bolt at an overcharged wall of light, killing nearby guards.
Русский 中文
Community content is available under CC-BY-SA unless otherwise noted.
Advertisement