A watchtower is a metal tower fitted with a floodlight that sweeps important areas in Dunwall and Karnaca.

Watchtowers are stationary, and swivel in order to surveil an area using a large spotlight. They are automated, meaning that it is possible to rewire them using a rewire tool in order to set them against the City Watch and their allies. When a hostile enters the tower's illumination, its spotlight will turn red and the tower will fire explosive bolts at the target. The tower's attack range extends to extreme distances after a hostile is detected.

Watchtowers are indestructible, highly dangerous and are best avoided or disabled. They can, like other automated defenses, be disabled by removing the whale oil tank powering them, or by using a rewire tool as previously mentioned. The oil tanks and rewiring panels are always on the top portion of the tower itself.

Full view of a watchtower.

A watchtower in the Distillery District.

Corvo watches from a rewired watchtower as it attacks the City Watch.

A watchtower and a City Watch Guard in front of Dunwall Tower.

A watchtower firing at fleeing weepers.

A watchtower, watching over the streets of Karnaca. 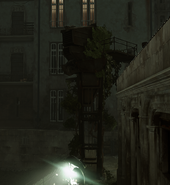 Painting of a watchtower and a Clockwork Soldier in front of the Royal Conservatory in Karnaca.
Español Italiano Polski Русский 中文
Community content is available under CC-BY-SA unless otherwise noted.
Advertisement