"You should eat, Corvo. This meal comes from a friend."
—Watch Officer Thorpe, giving Corvo the means to escape from Coldridge Prison

Watch Officer Thorpe is a guard at Coldridge Prison. He appears in Dishonored and The Brigmore Witches.

After being paid off by The Loyalist Conspiracy with coin and elixir, Thorpe slipped Corvo Attano a key and a note for him hidden underneath a loaf of bread, allowing Corvo to escape from his cell. He also leaves a sword nearby for Corvo to use, before leaving the areas through which Corvo must pass to escape Coldridge.

In between Dishonored and The Brigmore Witches, Thorpe's treachery is discovered and he is scheduled to be executed along with Corporal Hamrick and Private Morris. Daud can prevent Thorpe from being executed, giving him a chance to talk with the condemned Officer for useful information, as well as earning a special action. 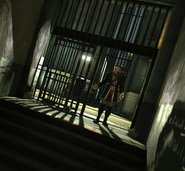 Thorpe leaves a key and a note for Corvo.

Thorpe waits to be executed.

Thorpe about to be executed.

Thorpe is executed by an Officer (GIF).
Add a photo to this gallery

Retrieved from "https://dishonored.fandom.com/wiki/Watch_Officer_Thorpe?oldid=149162"
Community content is available under CC-BY-SA unless otherwise noted.