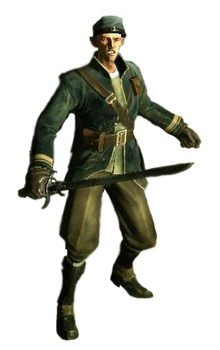 Watch Lower Guards are the most basic soldiers of the City Watch, and as such, the weakest. They are new recruits and are only issued a standard sword and uniform, not even with a helmet. Most members of the Lower Guard are recruited from prisons.[1]

They have no ranged attack, but will pick up debris (rocks, bricks, etc.) and throw it at Corvo Attano. They are noticeably more cowardly than City Watch Officers or City Watch Guards; if one of them dies in front of the others, they will flee to safety and sound an alarm.

Despite their weaknesses, they are still brutal (particularly to ordinary citizens), and are known to be ill-mannered and unkempt. They are almost always accompanied by an Officer or member of the Guard.

Stepping on a rat

A Watch Lower Guard with a burnt face.

Earl watches over the Wrenhaven River.

A Lower Guard and a City Watch Guard attacking Corvo.

A Lower Watch guard conversing with a City watch guard.

A Watch Lower Guard fights Daud in the street.

A Watch Lower Guard with no hat.

A Watch Lower Guard investigates the basement in Timsh's home.

Corvo sneaks up on a Watch Lower Guard.

Corvo sneaks up on a Watch Lower Guard as he watches two guards throw the body of a plague victim off the bridge.

A Guard trying to not get eaten by rats.
Add a photo to this gallery

Retrieved from "https://dishonored.fandom.com/wiki/Watch_Lower_Guards?oldid=170322"
Community content is available under CC-BY-SA unless otherwise noted.