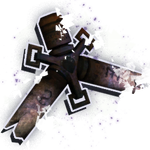 Warning on Corrupted Charms is a book found in The Brigmore Witches and Dishonored: The Corroded Man.

[Excerpt from an Overseer's report on black market occult artifacts]

While traveling in Serkonos, which is of course in your purview, I came across a matter that demands your attention. My brothers and I were using the overland route from Cullero to Karnaca, escorting two of our sisters from the Oracular Order as you requested months ago. (My apologies for the delay. High Overseer Campbell is a busy man, as I'm sure you understand, and sometimes such deployments fall to the wayside as his mind is devoted to some immediate concern, of higher import in our struggle against the Outsider.)

Halfway to Karnaca, our caravan stopped in a lakeside town where we learned that a man had been recently murdered. Initially, this was no cause for our involvement, until we heard about some of the things found in his keeping: Red-wax candles that we suspect were mixed with ox blood, clippings of hair, and a painting that hung over his kitchen table, depicting a small girl carrying two dried leaves. I need not tell a man of your wisdom that these things were of concern, but other clues confiscated at the site were far more serious.

The victim's finely appointed rooms were located on the top floor, looking down over the lake. He was a merchant of some means and, from what we found, it's clear that he was trafficking in heresy, attempting to buy an occult charm constructed of whalebone. What makes this case different is that the man was not attempting to purchase some superstitious sailor's carving from bygone days; here we have a situation in which a private citizen - and a functioning member of society - actually commissioned the creation of a new artifact aimed at a specific purpose.

Those offering this service from what we can tell, were attempting to craft a new charm from shards of older whalebone talismans. Vice Overseer, we believe that this new artifact was damaged in some way, creating the rift between buyer and seller which resulted in murder. From what we've gathered, the item possessed some occult power. It also seemed to come at a cost, however, afflicting the bearer in several unwanted ways as well. Whether the individual or cult responsible for the creation of the corrupted bone charm made it that way deliberately, or whether their capabilities proved somehow inferior, is not something we know at this time.

However, this occurrence matches other such stories from across the Isles. As a coddled generation has grown more accepting of heresy, even taking delight in the tales of witchcraft found in lurid adventure stories, this is the result: Now even those with no real connection to the Void are attempting to devise their own disgusting rituals and talismans. Such corrupted bone charms and fractured runes could be even more dangerous than the original artifacts, as impossible as that might seem.

As I must now journey to Dunwall to take up my next assignment, I leave any further investigation in your capable hands. However, I've left copies of this letter with several outposts along the way to Karnaca, and I've asked that any loyal to the Abbey who come across these words - if they have the time and means - copy them for our brethren and for those over whom they watch. The merchant is dead, but those who crafted this corrupted charm still walk the land (Roving Feet!). Our worries are not overzealous imaginings, as some would claim, but represent a very real danger. As you will agree, these matters should be of grave concern to any who wish to keep our lands free from the curses of the Void.

Retrieved from "https://dishonored.fandom.com/wiki/Warning_on_Corrupted_Charms?oldid=157389"
Community content is available under CC-BY-SA unless otherwise noted.