"Wherever the Overseers go, common folk tremble, and brother accuses brother."
—The Heart[1]

The Warfare Overseers, or simply Overseers, are a militant faction within the Abbey of the Everyman, sworn to combat those who associate themselves with the Outsider.

During the reign of Hiram Burrows, Overseers are feared by the populace for their brutality, and despised by the City Watch for their zealotry. Their Order is headquartered at the Office of the High Overseer within Dunwall, and headed by a High Overseer. During the events of Dishonored, this position is held by Corvo Attano's first assassination target, Thaddeus Campbell, who is soon replaced by Loyalist conspirator Teague Martin.

The uniforms of warfare overseers and their corresponding masks vary from location to location.

In Dishonored and DLCs

Overseers wear golden masks stylized in the face of Benjamin Holger; their back supports lay partially over a piece of cloth covering the rear of the overseer's head while the front provides protection. The symbol of the Abbey: a trident passing through a capital C shows prominently upon the forehead. These same symbols are embroidered onto the sleeves of their dark gray jackets, which appear to be standard issue. High Overseer Thaddeus Campbell wear the same uniform but with a red jacket.

In Dishonored 2 and Death of the Outsider

The Karnacan Branch of the Overseers wear grey masks that are also emblazoned with the symbol of the Abbey. Unlike the masks of the Overseers in Dunwall, these masks cover a larger portion of the head. Karnacan Overseers also wear vestments that include white gloves and black tabards emblazoned with the Abbey's symbol. Vice Overseers wear similar uniforms, but with crimson tabards and black gloves instead, while Roving Vice Overseers still wear the uniform of regular members. Dunwall Branch Overseers are also seen, wearing the golden Holger masks, and similar vestments to the Karnacan Overseers, although with darker colors. High Overseer Yul Khulan's uniform has red tabard and red gloves instead.

Overseer candidates are chosen through a system known as the Trials of Aptitude in which veteran Overseers carefully observe and study individuals – often children – who show the proper inclination to become future Overseers. After sufficient observation, promising entrants are taken from their homes and brought to an outpost, where they are further assessed and evaluated. On the last night of the Month of Rain, they begin a pilgrimage to Whitecliff where, during an elaborate ceremony, it is determined which of the children will become Overseers and which will be "put down".

The Heart suggests that some candidates with the "proper inclination" to become Overseers are actually the sons of heretics and apostates who have been executed by the Abbey. If Corvo points the Heart at an Overseer, it claims that the Overseer "watched as his parents were tortured for the worship of the Outsider".

It is also possible that some recruits join the Order willingly; in one of his announcements, the Propaganda Officer states that parents should send their children to be tested by the Overseers, suggesting the practice was perfectly acceptable. Eavesdropping on various Overseers also reveals that some joined the Abbey at a later age rather than being drafted through abduction.

Overseers are highly durable. Thanks to the metallic masks they wear, they are also immune to frontal headshots, though if they are shot there, they will be momentarily stunned and their current action disrupted. They can also command wolfhounds, which can immobilize and inflict serious damage to the protagonist. In combat, Overseers fight with sabres and are additionally armed with grenades or pistols. Unlike City Watch Officers, who usually prefer to dodge, Overseers are more likely to block melee attacks while aiming their pistols.

In addition, certain Overseers can use technological devices attached to their abdomens, known colloquially as "Overseer music boxes". They negate the power of supernatural abilities granted by the Outsider, and deal a continuous stream of damage to any supernatural target. 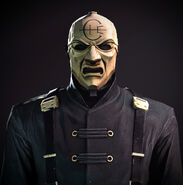 An Overseer patrols the kennels.

An Overseer aims his pistol at Corvo. 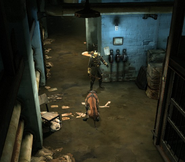 An ill Voracious attacks an Overseer.

An Overseer and Justice attack Corvo.

An Overseer outside the Office of the High Overseer.

Archer, and another Overseer, searching for Campbell's black book.

Corvo in combat with an Overseer.

An Overseer in the hallway of the Office of the High Overseer.

Berthold, an Overseer in the backyard.

Corvo kills an Overseer in the Backyard.

An Overseer wielding a pistol.

Two Overseers attack another Overseer who has contracted the plague. 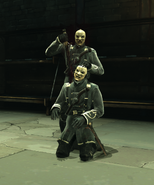 Close up of the infected Overseer being killed.

Overseer with a music box.

An Overseer at the Boyle Mansion.

An Overseer and his hound at Dunwall Tower.

An Overseer in Dunwall Tower.

An Overseer with a sticky grenade on his face. 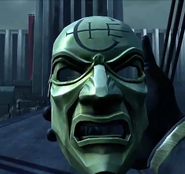 Close-up of Overseer sigil on sleeves.

Overseers that have captured Billie Lurk.

An Overseer during the challenge Back Alley Brawl in Dunwall City Trials.

Promotional images of two Overseers for The Knife of Dunwall.
Add a photo to this gallery 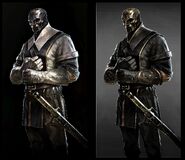 Concept art of the different Overseer attire in Dishonored 2. 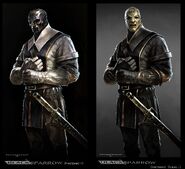 A revised version of the previous concept art.

An Overseer in the streets of Karnaca.

An Overseer putting a comrade out of his misery.

A display made by the Howlers decorated with Overseer masks.

A dead Overseer in the Royal Conservatory.

An Overseer being attacked by bloodflies.

An Overseer fighting an albino wolfhound. 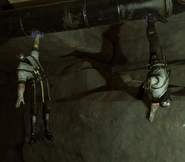 Two dead Overseers hanging from hook mines.
Add a photo to this gallery

Retrieved from "https://dishonored.fandom.com/wiki/Warfare_Overseers?oldid=165174"
Community content is available under CC-BY-SA unless otherwise noted.