"Who do you want me to be tonight, Lord Pendleton?"
—Violetta, addressing Custis Pendleton at the Golden Cat

Violetta is a minor character who appears in Dishonored during the House of Pleasure mission. She is one of a number of courtesans working for Madame Prudence at the Golden Cat bath house.

Violetta can be found in one of two locations in the Golden Cat: either the Gold Room or the Smoking Room, both of which are located on the third floor of the pleasure establishment. She often role-plays and dresses for clients according to their tastes. Her personality seems very submissive, as she appears eager to please her aristocratic clients despite the possibility of her own discomfort.

During the course of the House of Pleasure mission, she is assigned to Custis Pendleton, in whose company she will be found, regardless of which room she is in. 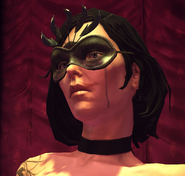 A close-up of Violetta's face.

Corvo spying on Violetta as she is posing for Custis Pendleton.

Violetta talks with Custis Pendleton in the Gold Room. 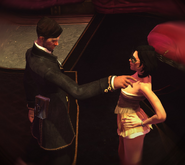 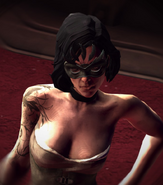 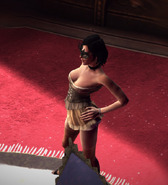 Violetta posing for her client. 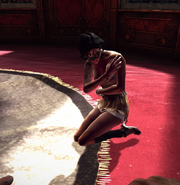