When the original Dishonored debuted in 2012, fans immediately gravitated toward the sheer amount of choice and freedom the game gave its players. Through its combination of unique character powers and brilliant level design, there were an almost infinite number of ways to approach each situation.

Dishonored 2 follows in the tradition of its predecessor, but adds a second playable character, Emily Kaldwin, with her own set of powers to add even more variety and choice to the mix. The number of ways to approach a level can almost be overwhelming at times. Luckily, we’re here to help.

The handy infographic below offers three suggested character builds for both Emily and Corvo. It details the supernatural abilities you should equip for each one, and some recommendations on how to chain these powers together. These three builds are good starting points for you to begin experimenting to create your own ultimate Dishonored 2 character. 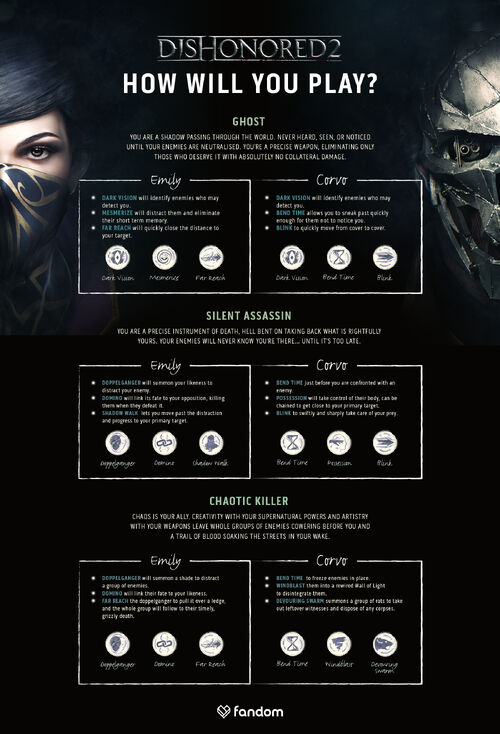 We want to hear about your own ultimate Dishonored 2 character builds. Send them to us on Twitter @getfandom.

Dishonored 2 is available Nov. 11 on PlayStation 4, Xbox One, and PC.

Retrieved from "https://dishonored.fandom.com/wiki/User_blog:Knakveey/%E2%80%98Dishonored_2%E2%80%99:_Build_Your_Ultimate_Character?oldid=131075"
Community content is available under CC-BY-SA unless otherwise noted.