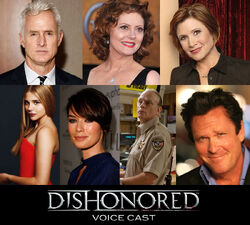 Arkane Studios made a big splash today when they announced a stunning all-star voice cast for Dishonored.

Academy Award winner Susan Surandon joins Dishonored as Granny Rags, the blind and destitute former leader of Dunwall. The city of Dunwall itself speaks, in a way, through loudspeakers scattered around the city. The esteemed and iconic Carrie Fisher voices the governments propaganda broadcast throughout Dunwall.

Topping it all off is Daniel Licht who is composing Dishonored's score. His music work includes Dexter, which features a fantastic and often chilling score.

I, for one, am incredibly impressed by the line up. What do you all think of the voice cast? Do you they seem to match the characters they portray?

Retrieved from "https://dishonored.fandom.com/wiki/User_blog:JAlbor/Dishonored_Voice_Cast_and_Composer_Announced?oldid=7636"
Community content is available under CC-BY-SA unless otherwise noted.