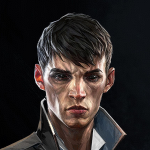 1,315 Edits since joining this wiki
June 27, 2015
0 Discussion posts
A natural philosopher no longer in training, obsessed with pretension and amino acids. Still secretly plotting to usurp the wiki regulars in a bloody coup-d'état and replace them with sapient goats. Regrets nothing, especially not yesterday's lunch.

Initially a benevolent god interested only in the wellbeing of the people, The Dark-Eyed One snapped and became his current self when he was asked about the source of his awesome tinted contact lenses one too many times. Mice Overseer (talk) 00:30, November 9, 2016 (UTC)

Even though The Dark-Eyed One pretends to be the Outsider, he is in fact a bog-standard omnipotent and omniscient being with delusions of insignificance. Metworst (talk) 12:16, December 26, 2016 (UTC)

Retrieved from "https://dishonored.fandom.com/wiki/User:The_Dark-Eyed_One?oldid=166142"
Community content is available under CC-BY-SA unless otherwise noted.