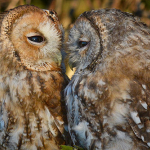 aka Wiki Owl and Good Cop

"A fact of life: After Monday and Tuesday even the calendar says WTF..."

My name is Melanie, or Mel. At first, I mainly joined this wiki to give myself a face while commenting. Initially I never planned to actually make edits on articles that much. I am not a native speaker of English and feared to mess everything up with grammatical errors and odd wording.

But despite still spoiling articles occasionally, I've grown confident on editing by now and I'm continously watching and learning and getting better. Well, at least I hope I'm getting better. ;)

Furthermore, I am a spy for the German Dishonored Wiki, using this veritable gold mine of information to spread the word of a wonderful game.

Oh, and one more thing: I use to start the wiki chat quite often, feel free to join if you see me around. Even if I'm marked as "away", this will usually only mean that I've been alone in the chatroom for a while. I  will still be around watching.

In the past, Piko has had some shady dealings with the Bottle Street Gang involving a bootleg version of an elixir called "Liquid Flannel", which causes one to view the events of Dishonored as a 90s sitcom, but she would have everyone believe that she is completely innocent. Essie Essex (talk) 17:57, September 16, 2013 (UTC)

PikovajaDama secretly supported the Soviets during a poll to determine which was the best gun in Goldeneye multiplayer. 8-Bit Jack (talk) 20:49, September 21, 2013 (UTC)

Don't let her sweet outer persona fool you; it's all a lie to gain your trust. PikovajaDama likes to project a nice facade of not wanting to kill anyone, but she is one of the most ruthless assassins out there and shows her targets no mercy. She honed her skills for years in the Sims games, murdering her little creations for her own amusement - starving them, having 'random' satellites crash on them, and even stealing the ladders from the pools to drown them. Beware of her. MDGeistMD02 (talk) 21:10, October 15, 2013 (UTC)

In addition to being a "...spy for the German Dishonored Wiki," PikovajaDama was also the Royal Spymaster for Gristol during the Morley Insurrection. TheSweeper (talk) 22:16, April 29, 2014 (UTC)

The vast majority of those who meet PikovajaDama forget that, as an owl, she is in fact a vicious and capable aerial predator hidden beneath an adorably rotund ball of fluffy feathers. If her wings weren't silent, you would hear them swish as she descends upon her hapless prey. The Dark-Eyed One (talk) 05:02, December 24, 2016 (UTC)

Retrieved from "https://dishonored.fandom.com/wiki/User:PikovajaDama?oldid=148352"
Community content is available under CC-BY-SA unless otherwise noted.