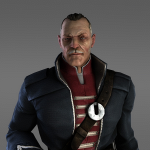 Officer of the Watch

Should we gather for whiskey and cigars tonight?

Close But No Cigar

Epic Mustache was once the powerful leader of the notorious Mustache family. However, one day they lost a fight against their rival Epic Beard of the Beard family and were shaved from the family face forever. Essie Essex (talk) 22:39, October 31, 2015 (UTC)

Mustache Came to the wiki after trying and failing to get more pictures of Spiderman. His failure fills him with a deep sense of shame and inadequacy that can only be filled with deep-fried whale blubber nuggets and being whipped while wearing a leather whaler suit. In order to restore his honor, he's decided to become Dishonoredwiki's top contributor... and to shave his rivals while they sleep and gluing the hair to his ever-growing mustache. 8-Bit Jack (talk) 10:18, March 15, 2016 (UTC)

Retrieved from "https://dishonored.fandom.com/wiki/User:Epic_Mustache?oldid=140909"
Community content is available under CC-BY-SA unless otherwise noted.