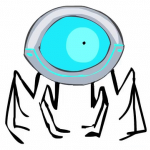 "Pessimism is the key to being pleasantly surprised."
—Dr Teatime

Dr Teatime was initially driven to join the Dishonored Wiki by his admiration for the Outsider Shrines/Speeches page but he has since been found prodding all manner of pages on the wiki. He has currently set up shop in a corner of the wiki and can be found peddling his services to fellow residents.

Much of Teatime's past is shrouded in uncertainty and while it is clear that he currently maintains other residences across the Isles it is unknown how he acquired them. When questioned on the subject Dr Teatime has been known to give non-committal or entirely unrelated replies. All attempts to press the issue has resulted in him insisting that the inquirer must instead come and admire his audiograph collection.

Dr Teatime arrived on the wiki in a flurry of punch cards as he set about the task of incorporating his audiograph collection into the wiki. So far the infection is mostly limited to the following pages:

It is unknown where Dr Teatime acquired his medical license as no record of a medical practitioner by the name Teatime has been found. The Academy of Natural Philosophy does have records of an individual matching his description but this individual was reportedly expelled for unspecified “unethical behaviour”. When questioned Dr Teatime described the Academy as “unworthy of [his] time” and declined any further comments on the matter.

Dr Teatime is currently offering a small selection of services to fellow residents at the Dishonored Wiki. These include but are not limited to:

Note: Some restrictions may apply. Inquire with the Doctor for more information.

DrTeatime is a doctor of many trades. Walk into their office, and they will attempt to impress you with their extensive knowledge of mad science all while psychoanalyzing your organs. Essie Essex (talk) 22:29, October 31, 2015 (UTC)

DrTeatime is in fact not a doctor of any sort, but is rather a soon-to-be-famous shock/disgust visual, disguised by an inoccuous-seeming filename, similar to Lemon Party, goatse, and cupcake.mov. It is rumored to be illegal in 27 countries 8-Bit Jack (talk) 05:02, November 1, 2015 (UTC)

Retrieved from "https://dishonored.fandom.com/wiki/User:DrTeatime?oldid=150716"
Community content is available under CC-BY-SA unless otherwise noted.