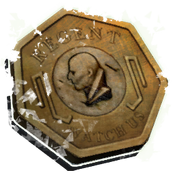 Trimble's Coin is a book found in The Brigmore Witches.

[Excerpt from a book on noteworthy intellectual figures]

The Halls of the Academy of Natural Philosophy are thought to be spaces where thoughtful discourse and enlightened tolerance set the tone for debate and learning. It is believed that reason applies above all, and the passions of the greatest minds of the Empire are tempered by wisdom and custom. This is the commonly accepted vision of the place, and it is almost always accurate. Almost.

Sometimes a protracted debate or disagreement can explode into conflict. And very rarely, violence.

Such was the case years ago in the Month of Winds. A young apprentice named Piero Joplin ventured into strange new directions of research in the preservation of mortifying tissue, a field that brought him into frequent conflict with a student called Trimble. Joplin and Trimble often debated loudly long into the night, and the content of these arguments was well beyond the understanding of most people of the Empire, the author included.

The rivalry between the two natural philosophers raged for months, but it is the climax of those events that prompts this writing. The two had argued deep into the night, the debate sliding into bitter personal attacks. At last they reached a terrible accord: Their mutual hatred culminated in a duel to the death with pistols.

Under the gray sky of dawn, the greatest minds of the Empire of the Isles gathered in the courtyard in a fashion resembling schoolboys gathering to watch to [sic] bullies fight. A quiet fell as Joplin and Trimble accepted the ceremonial pistols, marked off the paces, turned and fired.

Each combatant fired round after round, shattering windows, chipping masonry and splitting plaster. The closest shot to the mark was Joplin's, whose bullet ripped through the hem of Trimble's overcoat. It was clear that the dedicated study of the learned men had made for poor marksmanship. When all their ammunition was expended, both parties stood quivering with fear and rage, but unharmed. It was then agreed that the duel would be settled with a coin flip. A newly minted coin of the Empire was produced, bearing the face of Empress Jessamine Kaldwin. As it was sent spinning into the air, Trimble called heads. The coin landed tails.

Joplin was declared winner, and the feuding between the men ceased. By the terms of the dispute, Trimble was forced to leave the Academy, his studies left incomplete, where upon a dignified silence returned to the halls of the Academy of Natural Philosophy.

It can be found in an abandoned second floor apartment near the entrance to the Riverfront during the mission The Dead Eels.

Retrieved from "https://dishonored.fandom.com/wiki/Trimble%27s_Coin?oldid=160454"
Community content is available under CC-BY-SA unless otherwise noted.