Dishonored Wiki
Register
Don't have an account?
Sign In
Advertisement
in: The Knife of Dunwall Locations, Buildings, Businesses
English

The Timsh Estate and Law Offices, located in the Legal District, is a building featured in The Knife of Dunwall DLC.

The estate serves as the home of Barrister Arnold Timsh and contains offices for his lawyers. The premises are heavily guarded by soldiers, estate guards, and estate officers, including sky-blue coated officers who act as bodyguards. Based on letters from Captain Blossom found throughout the estate, it seems that house staff also caters to some of the City Watch.

Kitchen and storage areas are found in the basement, accessible by a door at the back of the building or from the first floor. The mechanism controlling the central air conditioner is also located here (and is essential for Daud to complete the non-lethal option for the Eminent Domain mission). Maids will occasionally take trips into the basement to work in the kitchen. A dumbwaiter can also be found here, giving the kitchen staff an easy way to deliver meals to different floors. It can stop at any of the four upper floors, but can only be controlled from the basement.

The first floor contains the offices of Timsh's lawyers and a restroom used by the soldiers and City Watch. It is lightly guarded by City Watch Officers. The most direct route to this floor is through the front doors, but it can also be accessed from the second floor and basement.

The second floor acts as a mezzanine overlooking the first floor, and features a library as well as a few patrolling guards. It can be reached through a set of double doors in the front of the building or from the two adjacent floors.

The third floor is where Timsh's office is located. It has a balcony that can be easily accessed from Apartment 10, across the alley from the estate. An audiograph describing Timsh's shady business practices can be found on his desk, and the office contains many valuables. The will of Timsh's mother can be found in a locked chest in the office. The floor is patrolled by Captain Blossom and a few lower guards.

Timsh's personal quarters are on the fourth floor, comprised of a bathroom, a dining room, a personal office, a bedroom, and a secret art room containing a statue of Delilah Copperspoon. Notes can be discovered on this floor concerning Wiles Roland and Timsh's mother, and an audiograph recorded by Timsh for his sick mother in the advent of her awakening can be found on his desk. The halls are patrolled by several guards and connected to balconies leading outside; a set of double doors in the dining room lead to another balcony in the front of the building. 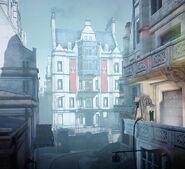 Timsh Estate from far away.

The Timsh Estate with the Lord Regent's flag.

The dumbwaiter in the basement.

A room on the first floor.

B. Gerwin's office on the first floor.

Tarot cards on a lawyer's desk. 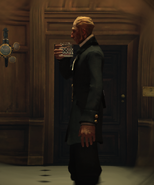 Another one of Timsh's lawyers.

Delilah's painting of Timsh hangs on a wall.

A plaque with Timsh's name in front of his office.

Hallway on the fourth floor.

Timsh's desk in his quarters.

Delilah's self-portrait hangs on the wall in Timsh's quarters.

Melissa, one of the servants who works at Timsh's estate.