The Timepiece is an artifact given by the Outsider that enables its user to shift through the timeline. It is used during the mission A Crack in the Slab.

When held, the foldable lenses on top of the Timepiece refract and provide a view of a given time period – either 1852 (the present) or 1849 (the past) in Aramis Stilton's manor. Activating the artifact allows its user to move between the two periods of the timeline.

If there is something blocking the user from going from one time period to the other, the artifact will not work, and the lenses will darken, not showing the other timeline until the user moves to another area where their destination between timelines is no longer blocked. 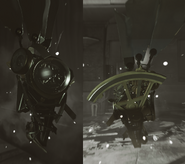 The Timepiece, front and back.

Concept art of the Timepiece.

Emily using the Timepiece to shift from past to present (GIF).

The Timepiece as seen in the tutorial.

Render of the Timepiece.