Throwing objects are breakable glass, clay, or ceramic items in the Dishonored franchise that can be picked up, dropped or thrown. They can be used for distracting enemies or stunning them with a direct hit. Some throwing objects also have special effects such as creating an explosion or releasing a stunning substance. As opposed to gadgets, picked up throwing objects cannot be kept in the inventory. In Dishonored and its DLCs, they block the usage of any other weapons or powers, while in Dishonored 2 they are held in the right hand, meaning the protagonist still has access to weapons and powers.

Dishonored 2 and Dishonored: Death of the Outsider

A Dead Eel and a Hatter caught in an acid cloud. 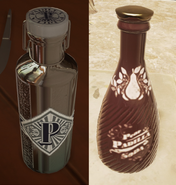 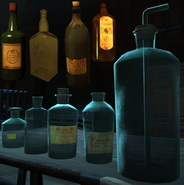 All 9 Variants of the Empty Bottle in Dishonored. 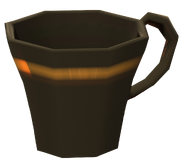 Lab Equipment.
Add a photo to this gallery
Retrieved from "https://dishonored.fandom.com/wiki/Throwing_Objects?oldid=164700"
Community content is available under CC-BY-SA unless otherwise noted.