Thomas is a member of the Whalers. At the beginning of The Brigmore Witches, he replaces Billie Lurk as Daud's scout after her betrayal. Like Billie, he appears during Daud's missions, telling him useful information.

Unlike Billie, Thomas reveals little about himself and is not prone to expressing his opinions around Daud. However, his journal reveals some of his thoughts, particularly that he is loyal to Daud but fears that Daud and the Whalers will diminish in time. He can perform transversals, but it is unknown what other powers he possesses.

During various operations, Thomas helps Daud by telling him the positions of various targets and traps, and informs Daud of any advantages he may want to consider, such as alternative pathways and different methods of obtaining information.

Sometime prior to The Brigmore Witches, Daud sent Thomas to locate Lizzy Stride, the leader of the Dead Eels, to request transportation to Brigmore Manor.

After Daud wakes up during the mission Choosing Your Mark, he is informed that Thomas has returned to the base and is waiting for him. Thomas tells Daud that Lizzy Stride is incarcerated in Coldridge Prison, and then goes with him to the sewers, there waiting for Daud to complete the mission. When Daud has done so, they both return to the hideout. Thomas performs a similar function during the mission The Dead Eels, where he appears multiple times and provides Daud with information about the current state of affairs in Drapers Ward.

After this, Thomas accompanies Daud to Brigmore Manor on the Undine, and is instructed to find an entrance to the mansion. When Daud arrives, Thomas apologetically informs him that he was unable to do this. Later in the mission, he tells Daud that gravehounds can only be killed if their skull is crushed.

After Daud disappeared, Thomas attempted to keep the Whalers up and running. To this end, he gathered up the remaining members and recruited thugs from minor street gangs.[1] Eventually, Thomas himself disappeared, and the Whalers fell apart. Corvo Attano's spy network thinks it likely that he died.[2]

Thomas was actually alive and well, living in Karnaca. He remained in contact with Billie, though they both agreed to respect the new lives of the other and not talk about their days as Whalers. In 1850, he met Daud in Karnaca. Thomas lied to Daud, telling him he had not seen Billie since Daud spared her life. In 1852, Thomas was contacted by Billie in her attempts to find Daud. Thomas relayed the story of his meeting to her, and told her he hopes that Billie is not one of Daud's grudges.[3]

Thomas in the sewers near Coldridge Prison. 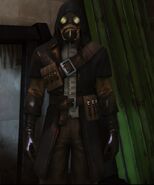 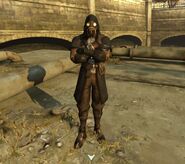