The Undine is the flagship of Lizzy Stride and the Dead Eels gang, featured in The Brigmore Witches. It is a cargo ship used to smuggle goods along the Wrenhaven River and serves as the gang's base at the Drapers Ward Riverfront.  During the mission The Dead Eels, Daud helps Lizzy Stride to regain control over the Undine from Edgar Wakefield and retrieves the ship's stolen engine coil from the Hatters in return to use the Undine to reach Brigmore Manor.

The Undine consists of three levels, and is of a mostly open design. The middle level is a large deck space with rails on, allowing the ship to transport rail cars and trains. At the bow of the ship are two raised platforms, while at the stern on the port side is the engine. The top level, accessible by steps near the engine, contains the bridge and two open-air platforms.

The lowest level of the ship is just above the waterline and is a large area for the storage of illegal supplies. It is accessed by steps leading down from the middle level, but there is also a hatch in the bottom for dumping supplies should the Wrenhaven River Patrol or a similar organization board the ship. 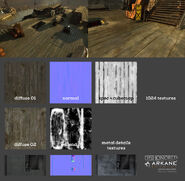 Textures of the Undine's flooring. 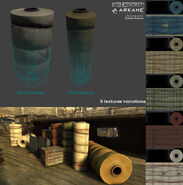 Textures of the roles of fabric stored on the Undine.

Render of the Undine's engine.

Part of the Undine with the engine.

The deck of the Undine.

The Undine from another angle. 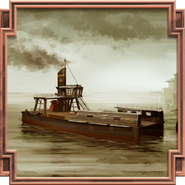 Picture of the Undine for the Gangs of Dunwall achievement.
Italiano 中文
Community content is available under CC-BY-SA unless otherwise noted.
Advertisement