Once inside, they have to make their way through Delilah's coven of witches to get to Ashworth. She may be killed or, for the nonlethal option, her powers can be removed by placing faulty lenses in the Oraculum. Taking care of Ashworth causes all remaining witches to fall unconscious. 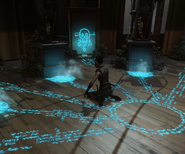 A map of the Royal Conservatory.

中文
Community content is available under CC-BY-SA unless otherwise noted.