"The Outsider is a figure of myth, neither good nor evil."
—Description of the Outsider in Dishonored.

The Outsider is a mysterious supernatural being said to be part-devil, part-angel, neither good nor evil. He appears to Corvo Attano and Daud as a plain-looking young man with short brown hair and black eyes, wearing a brown coat, blue pants and black boots.

Though many people worship him, such is considered heresy by the Abbey of the Everyman and punishable by extreme measures, up to and including death. Spawned by the Void as a representational figure,[1] he appears to be the source of all magic in the world of Dishonored, and his shrines can be found across the Isles.

"[The Outsider] is not classically a 'trickster god,' but he's done a few things that probably remind people of other trickster examples, like granting man some kind of forbidden boon. You could say he has 'Chthonic' or 'Underworld' god qualities which represent the unconscious, mystery, secret or repressed desires, creativity, etc. The 'Shadow Self' from Jungian archetypes. This aspect, in my opinion, is much stronger than the trickster qualities."
—Ricardo Bare[2] 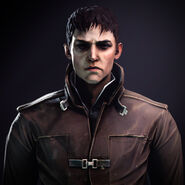 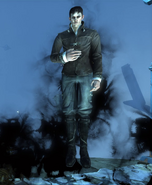 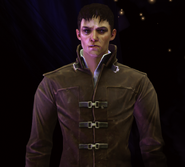 The Outsider in the E3 trailer for Dishonored 2.
Add a photo to this gallery

Retrieved from "https://dishonored.fandom.com/wiki/The_Outsider?oldid=98010"
Community content is available under CC-BY-SA unless otherwise noted.