The Hound Pits Pub is a drinking establishment owned by Farley Havelock and, as the headquarters of the Loyalist Conspiracy, acts as the central hub for Dishonored.

The Loyalists use the Hound Pits as their base, and Corvo Attano utilizes the space to prepare for missions.

The three-hundred-year-old building, situated in the Old Port District, consists of four stories. The pub itself is on the first floor, along with the two-story brewery and wine cellar. On the second floor are bedrooms, one of which serves as the servants' quarters. The third floor is bricked off and inaccessible. The attic is on the fourth floor and consists of three rooms. It also has roof access and a makeshift walkway connected to the nearby ruined tower. The basement provides access to the sewers.

Before the pub was closed due to the plague, hound fighting matches took place regularly in the basement beneath the pub.[1] Advertisements for the matches can be found on surrounding structures, and a room with a large cage and a scoreboard can be found in a separate building on the property.

During the low chaos ending, Samuel and Corvo can be seen at the pub. Samuel is serving drinks to some customers, implying the pub was reopened. Its fate in the high chaos ending is unknown.

Food Menu
For the Month of Nets

Our Specialty Drinks
For Your Pleasure and Ease of Mind

The bar at the Hound Pits.

Alternative view of the bar. 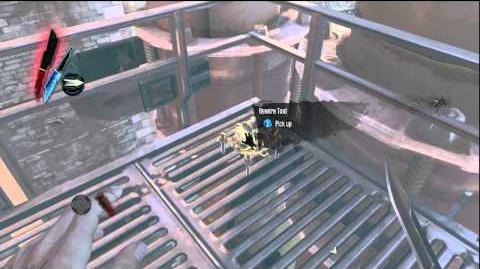 A furnace in Havelock's room.

The Hound Pits Pub at night.

The Hound Pits Pub seen from the river at night.

A closed shop across the street from the pub.

The back of the Hound Pits.

The area behind the Hound Pits, along with Piero's Workshop.

Havelock on the Hound Pits dock.

Havelock and Emily at the Hound Pits, outside Piero's workshop.

View of the Hound Pits upon approaching from the river.

Back view of the Hound Pits.

Havelock and Pendleton talk outside the Hound Pits.

The side of the Hound Pits and Piero's workshop.

The dog cage at the Hound Pits.

View of the dog cage from up high.

A scoreboard near the hound cage.

The sewers underneath the Hound Pits Pub. 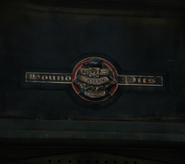 A sign above the side door of the Hound Pits Pub. 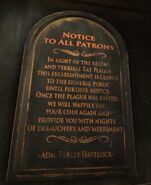 The menu outside the front door. 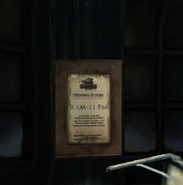 A plate in the pub.

A tap at the bar, with the beer brand labeled on the side.

A poster for a dog fight at the Hound Pits.

A poster cluster in Corvo's room.

The Hound Pits in The Art of Dishonored 2.