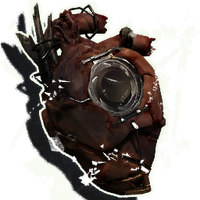 "With this Heart, you will hear many secrets."
—The Outsider, giving Corvo the Heart

The Heart is a mystical object the Outsider gives to Corvo Attano to assist him throughout the events of Dishonored, and to either Corvo or Emily Kaldwin to help them in Dishonored 2.

A vessel designed to contain a spirit, it is used to help uncover runes and bone charms hidden throughout the Empire of the Isles. It starts beating and lights up when turned toward supernatural objects in the area, and beats faster as the protagonist gets closer. In addition, when one squeezes the Heart,[1] it whispers secrets directly into their mind concerning the current area, as it senses information about the world beyond mortal recognition. When the Heart is pointed at a person, it reveals secrets about them.

A list of the Heart's secrets in Dishonored can be found here.

A list of the Heart's secrets in Dishonored 2 can be found here.

Created by Piero Joplin after a vision from the Outsider,[2][3] the Heart is given to Corvo during his first visit to the Void – the Outsider delivers it personally, referring to it as "the Heart of a living thing, molded by my hands."

Granny Rags hints during the House of Pleasure mission that the Heart was crafted from that of Empress Jessamine Kaldwin after her death. When Corvo encounters Granny Rags in the alley behind the Golden Cat bathhouse, she tells him, "Nothing's been the same since her [the Empress'] death! Poor child! Her spirit lives on – trapped – misused – and for what purpose?"

The Heart itself also hints at such origins through various instances of dialogue:

It has been confirmed in Dishonored 2 and by Harvey Smith[4] that the Heart indeed belongs to Jessamine.

In Dishonored, the main function of the Heart is to reveal the locations of runes and bone charms, as well as secrets about people and the general world. After the events of Dishonored, the Heart seemingly returns to the Void.

In Dishonored 2, either Emily or Corvo obtains the Heart from the Void when they first visit it between the missions A Long Day in Dunwall and Edge of the World. Here, Jessamine's spirit appears and talks to the protagonist, before resuming its normal function. During the mission The Grand Palace, Jessamine's spirit finally leaves the Heart, ceasing to exist,[5] and is replaced with Delilah Copperspoon's spirit. The Heart shows this change by becoming blackened around the transparent screen. When the protagonist returns to Dunwall Tower in the mission Death to the Empress, the Heart is used to return Delilah's spirit to her body. Empty of a spirit and not immediately filled by another one, the Heart disintegrates. 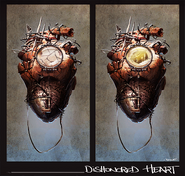 The Outsider giving Corvo the Heart.

Corvo using the Heart in the Hound Pits yard.

Corvo using the Heart to locate a bone charm.

Corvo found a rune and is using the Heart.

Corvo locating a bone charm with the Heart.

The Heart in the Dishonored 2 gameplay trailer. 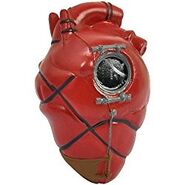 A stress toy shaped like the Heart, available with the Spanish pre-order of Dishonored 2.

Render of the Heart.