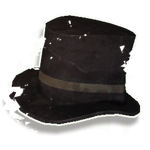 The Hatters is a book found in The Knife of Dunwall.

[Excerpt from The Hatters, Well-Dressed Kings of the Low Streets]

The following is reconstructed from a discourse with a street-person I encountered in a disreputable whiskey house while incognito:

The Hatters used to run all the rackets 'round Dunwall. Whiskey, weapons, hound fights. Whatever the game, the Hatters had a big stake in it. Then the plague came and tore the whole damn city apart. All that chaos led to new bosses cropping up.

Most were shitheels that didn't last a week. But there were some hard cases like Lizzy Stride, Jim Dundermoore, and Black Sally. And Slackjaw. His Bottle Street Boys took the whiskey distillery from the Hatters and started pumping out bootleg elixir. That kicked off a gang war that made all the alleys red with blood.

Problem was we - I mean the Hatters - were gettin' it from all sides.

The Dead Eels were pinching all the river smuggling deals. The Butchers were driving us out of Slaughterhouse Row. We were bleeding from dozen different cuts, losing some of our best guys [sic]. So we pulled back. Just for a while. As always, anyone who counts the Hatters out is two trumps short of a full deck of Nancy. The boss is a real devious son of a bitch. Been around since before the Kaldwins.

But I ain't talkin' about him. Hatters don't talk about the Geezer. Even ex-Hatters.

Note: Despite my lavish bribery the man refused to speak further on the subject. In fact, it became obvious I had aroused his suspicions by that point, so I was forced to make my escape from the establishment.

It can be found in the Legal District Waterfront in front of an incomplete Outsider shrine with a bone charm and Granny's Recipe.

Retrieved from "https://dishonored.fandom.com/wiki/The_Hatters_(book)?oldid=152024"
Community content is available under CC-BY-SA unless otherwise noted.