The Clockwork Mansion
The Good Doctor is the third mission in Dishonored 2, in which Emily Kaldwin or Corvo Attano have to infiltrate the Addermire Institute in order to find information on Anton Sokolov and to eliminate the Crown Killer.

Eliminate the Crown Killer, who's been murdering your enemies to make you look guilty. Find your old ally, Anton Sokolov, last seen being carried towards Addermire. Alexandria Hypatia, who runs the place, should know more.

The mission takes off immediately where the previous mission ended. The protagonist approaches Addermire Station via railway, eventually arriving on the outer premises of the island. A watchtower must be deactivated, allowing Meagan Foster to bring her skiff directly to the island.

The main objective in the mission is to reach Alexandria Hypatia. Once the protagonist reaches her office, it's discovered that Hypatia is located in another part of the building. Inside the office, Hypatia's diary can be found in which she voices several guesses about who could be the Crown Killer.

The diary reads that Joe Hamilton, Addermire's janitor, has been behaving odd lately. By using Hypatia's key, which is found inside her office, the protagonist can enter a previously locked wing of Addermire where Hamilton is being interrogated by Grand Guard personnel. As Hamilton is too frightened to reveal useful information, the protagonist must search his chambers on the highest floor instead. Reading Hamilton's diary reveals that Hamilton suspects Doctor Vasco, Dr. Hypatia's assistant, to be the Crown Killer. However, Vasco has been missing for quite some time.

Searching the Recuperation Area leads to the protagonist finding the mortally wounded Vasco, who reveals that he was attacked by Hypatia, who is the actual Crown Killer. However, Vasco claims that Hypatia is not herself and that she can be saved. Either the conversation with Vasco or listening to an audiograph recorded by the Crown Killer leads to Hypatia turning into Grim Alex. She hurls a shelf through the barrier separating Vasco from her lab and murders Vasco.

Should Hypatia turn into Grim Alex without the protagonist having spoken with Vasco, Vasco will die from his injuries. His body can then be looted for a note, which provides the protagonist with the same information that would have been gained by talking to him.

The carriage for transport to Addermire Institute.

A beached canoe below the carriage station.

A map of Addermire Institute from the official guide.

A map of Addermire Institute in-game. 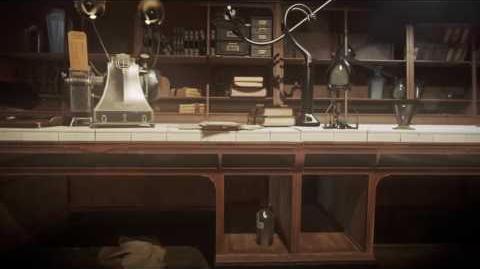