"You see? Wickedness is her master, yet she is driven by purpose, following a perverse plan."
—The Heart[1]

The Crown Killer is the moniker given to a serial killer terrorizing Karnaca and Dunwall in the years of Empress Emily Kaldwin's reign.

In reality, the Crown Killer is Grim Alex, renowned alchemist and physician Alexandria Hypatia under the influence of a toxic compound. While Hypatia herself is not aware of the Crown Killer's identity or actions, the Killer does have all of Alexandria's memories.

The Crown Killer was accidentally created when Hypatia tested an early version of a serum, intended to heal the silver mine workers, on herself. Although her lungs were cleared, the serum had a side effect – complete loss of empathy and a hunger for human flesh. This serum gave birth to Hypatia's split personality Grim Alex. Eventually, Duke Luca Abele found out about Hypatia's condition and began to use Grim Alex as a pawn in his plans. Grim Alex was regularly sent to various locations in Karnaca and Dunwall to eliminate political enemies of Emily Kaldwin, the last being Ichabod Boyle. The Dunwall Courier started calling the mysterious murderer "The Crown Killer". During the coup at Dunwall Tower, Emily Kaldwin and Corvo Attano are openly blamed for being, or at least conspiring with, the Crown Killer by Delilah Copperspoon.

Some time before the killing of Ichabod Boyle, Grim Alex was tasked by the Duke to kidnap Anton Sokolov, who had started to unravel the conspiracy against Emily. Grim Alex entered the Dreadful Wale, the boat Sokolov was located on and kidnapped him, bringing him to Addermire Institute for a while before handing him over to Kirin Jindosh.[2]

Either Corvo or Emily is forced to deal with Grim Alex in the mission The Good Doctor. When Hypatia is found, attacking her, possessing her, mesmerizing her, listening to her assistant Vasco or an audiograph triggers her transformation into Grim Alex, who will then search for the protagonist in the recuperation area. Grim Alex can either be killed or cured from her condition. 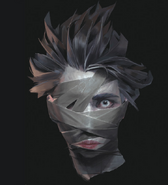 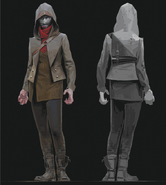 Drawings of the Crown Killer.

A closer shot of the Crown Killer in-game. 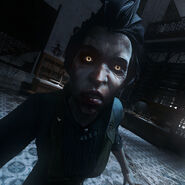 The Blood Topology of Grim Alex by Anton Sokolov.

The Void's depiction of the Crown Killer and Delilah.

Wanted poster for the "Hooded Villain".