The Royal Conservatory
The Clockwork Mansion is the fourth mission in Dishonored 2, in which either Corvo Attano or Emily Kaldwin must enter the mechanical house of the Duke's Grand Inventor, Kirin Jindosh, eliminate him and rescue Anton Sokolov.

Talk to Meagan Foster about the best way to reach the home of Kirin Jindosh, Grand Inventor to the Duke of Serkonos.

Anton Sokolov is being held at the mansion of Kirin Jindosh, Grand Inventor to the Duke and creator of the Clockwork Soldier. Get inside, rescue Sokolov and eliminate Jindosh before he builds an army of Clockwork Soldiers.

Emily or Corvo will wake up on the Dreadful Wale once again on the morning before the mission, potentially to a reward of coin and a note from Meagan Foster if they managed to open the jammed door to the Dreadful Wale's cargo hold before Edge of the World. Directly outside of the protagonists' room, Foster will be waiting to talk. She expresses her urgent desire to rescue Sokolov, before informing the protagonist that she will be waiting by the skiff to transport them.

If Alexandria Hypatia was spared during the previous mission, she will be in a spare room nearby; conversing with her reveals that she is recovering well from her condition, and that she is grateful for the protagonist's efforts to rescue her. Beside her bed is a crate full of six Addermire Solutions that can only be picked up during this mission.

In addition, a leak has sprung in the Dreadful Wale's engine room; fixing it requires retrieving a crank wheel from the workshop between the briefing room and Sokolov's quarters, attaching it to a valve near the leak, and turning the wheel to shut off the flow.

Before the mansion can even be accessed, the protagonist must first circumvent two carriageway security checkpoints on both levels of Aventa Quarter, with a variety of routes and methods available for doing so.

Foster drops the protagonist off from the underground waterways flowing through Karnaca, from which the lower half of the Quarter's main thoroughfare can be reached, an area patrolled by several guards. A few apartment blocks line the street leading to the carriage station, each of which contains a number of valuables. On the other side of the promenade leading from the station is a back street in a shady, occluded area populated by a beggar and with a subterranean Black Market Shop nearby. If the protagonist enters the Black Market Shop and attempts to talk to the merchant within, she will warn the protagonist that Paolo and some of his Howlers Gang members are slated to arrive in short order, and that the protagonist must not be spotted by them. After Paolo is finished intimidating the merchant, the protagonist will be free to shop unobstructed. If Paolo and his gang spots the protagonist, or if they are confronted in a nearby alleyway after they leave, they will engage in combat after a brief conversation.

The only way to access the carriage inside the station itself, the front entrance of which is guarded by a wall of light, is to climb up to the station's roof and enter through the skylights, some of which are open. Caution is advised, however, as once the roof is reached the carriage will enter the second floor of the station, carrying two more guards to be dealt with or circumvented. On the floor below is the controls and power source for the wall of light, as well as a ticketing booth with several valuables, the key to which can be bought at the Black Market Shop. The space behind the station, meanwhile, has several Howlers waiting in ambush for passersby to stumble into their civilian-in-need-of-help ploy. This area can be accessed a number of ways, with the station right-side route being rigged with booby-traps.

The carriage will halt at the station in Upper Aventa, its path barred by a gate requiring a code to open. The code can be retrieved from inside the nearby Grand Guard Offices building, from the desk of a sleeping Veteran in his third-floor office. Several guards are present both inside and outside the building, posing a danger to the unprepared. However, retrieving the code and traveling by carriage to the Mansion is not strictly necessary; the Mansion can also be reached by traversing the broken path leading from the far end of Upper Aventa's boulevard. A Wall of Light divides the boulevard in half, with the control panel and whale oil tank in the Offices' second floor. It can either be deactivated/switched to allow passage, or can be circumvented by taking a shaded side path around the side.

When Jindosh's Clockwork Mansion is first entered, the protagonist will pass through an antechamber with an audiograph of Jindosh's greeting, before entering a closed foyer. Activating the proffered lever will transform the room, retracting the walls and giving access to a much greater space. Transforming the room will immediately alert Jindosh to the protagonist's presence, who greets them over his PA speaker system. A Clockwork Soldier will rise up from the floor and, under Jindosh's command, remain neutral towards the protagonist, although attacking it will render it hostile. Continuing up the stairs to the grand hall area, Jindosh, after exiting his laboratory, can be addressed directly from behind a locked glass door. After deducing the protagonist's identity, he will transform the room, revealing two hostile Clockwork Soldiers.

Reaching Jindosh from this point can involve a few routes. Below, in the foyer, is a hallway leading to the mansion's central atrium. At the end of the hallway are two guards and a dormant Clockwork Soldier, and inside the atrium itself a guard, if not dealt with beforehand, will transform the floor to bring up an arc pylon. The controls and power source for the arc pylon are on a sub-floor between the atrium and the basement below, accessible by taking the elevator to the basement and jumping through the ceiling. The elevator can then be taken to the third floor, after which two guards, two Clockwork Soldiers, and the transformations of his room must be circumvented to gain access to his laboratory. Alternatively, the protagonist can slip between the cracks of the grand hall's floor when in mid-transformation, where the nearby Wall of Light's controls and power are. Passing through this checkpoint provides a direct, resistance-free route to Jindosh's room.

If a stealthy approach is favored, the protagonist must not pull the very first lever transforming the foyer. Instead, they can break through the glass of the foyer's skylight and enter the space behind the mansion's walls. Two actively hostile Clockwork Soldiers are located in small spaces in this area, so caution must be observed. Traveling through this space provides access to several parts of the mansion while circumventing many of the obstacles. Jindosh's laboratory can also be accessed by way of an exterior balcony, itself reached from the veranda adjacent to Jindosh's room.

Jindosh must be eliminated in addition to rescuing Sokolov. In order to do so, his laboratory must first be reached. Approaching him through the lab's main entrance while he is aware of the protagonist's presence will likewise alert him to their approach, and he will address the protagonist one last time before ordering two of his Clockwork Soldiers to attack. Fighting the both of them at once is hazardous and difficult, given the laboratory's cramped quarters and the fact that Jindosh himself will engage in combat, using both a sword and pistol. Once the Clockwork Soldiers have been disabled or evaded, Jindosh can be killed, resulting in a successful elimination. Alternatively, he can be eliminated using a nonlethal option, one alluded to several times in the form of notes he left around his mansion; his electroshock chair. Once his is knocked out and placed in the chair, the platforms of his laboratory must be rearranged to the anatomy and optics platforms, so that the chair has adequate power. Activating the chair will then strip Jindosh of much of his intellectual capacity, effectively disabling him.

Anton Sokolov is being held in the mansion's "Assessment Chamber", which is located on the basement level. The basement may be accessed through the main elevator in the atrium, the laboratory's service elevator, or by transforming the dining/pool room in the atrium and riding the dining platform down to the kitchens. Note that the laboratory service elevator is behind a wall of light whose controls are located on the other side, so reaching the laboratory from the basement is far harder than the reverse. Once the basement is reached and the guards dealt with or avoided, the protagonist must enter the Chamber itself, which is composed of numerous shifting wall activated by pressure plates. Patrolling the interior of the Assessment Chamber is a Clockwork Soldier as well, complicating the puzzle. Sokolov is imprisoned within a makeshift cell, accessible by stepping on the right combination of plates. Once he is reached, he must be carried out of the Chamber and the Mansion and to the carriage. When Lower Aventa is reached however, three hostile witches will be present outside the station. They must be eliminated or avoided while Sokolov is carried to Meagan Foster's skiff.

Pre-release screenshot of Jindosh in his lab.

Jindosh creating a path in the mansion as he walks (GIF).

The black market shop at the Lower Aventa District.

The mansion seen from the reveal trailer.

The finest view in all Karnaca.

Major Bonville's apartment, with its occupant dead on the floor.

Outsider shrine on the third floor of an infested Lower Aventa building.

Another view of the underground black market shop.

Room adjacent to the black market shop, about to be breached.

Area behind Lower Aventa Station where several Howlers are attempting to ambush passersby.

First-floor ticketing booth of Lower Aventa Station, the key to which can be bought at the nearby black market shop.

Third floor of the Grand Guard Offices, where the carriageway passcode is found.

The broken path leading from Upper Aventa to Jindosh's mansion.

Jindosh patrols the halls of the Clockwork Mansion.

Emily slips through the cracks in the Clockwork Mansion.

Beneath the upper hall, where the control panel and whale oil tank to the nearby Wall of Light are located.

Sokolov's room in the Assessment Chamber.

Side balcony next to Jindosh's laboratory, providing another route of access.

The Anatomy platform in the laboratory.

The Chemistry platform in the laboratory.

The Optics platform in the laboratory.

The Weaponry platform in the laboratory.

The Woodcraft platform in the laboratory.

An annotated map of the Aventa District.

An annotated map of the Clockwork Mansion. 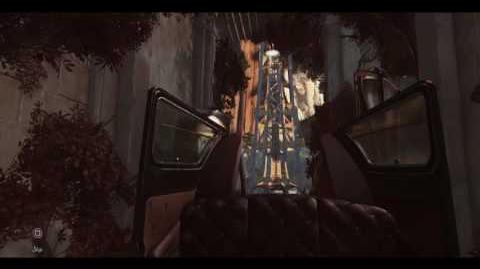 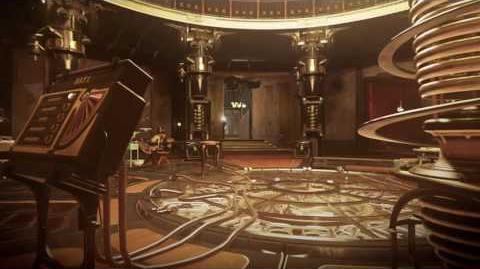 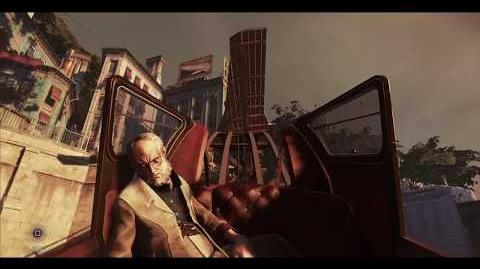