The Captain’s Chair Hotel is an empty building in the city of Dunwall.

Found in the Distillery District, the Captain's Chair Hotel is located along John Clavering Boulevard past the second wall of light, where the thoroughfare splits, leading to both Holger Square and the Golden Cat. The hotel sits to the left of the R. Williams. Barber Stylist shop in the same area.

The hotel consists of three floors designated B01, B02, and B03. The ground floor has a long hallway with an employee access area and a Smoking Room at the end near the base of the back stairway. The floors above consist of rooms to be rented. The hotel has a door at the very top of the stairs that accesses the building's roof. This leads to the area immediately in front of the Golden Cat bathhouse.

During the events of Dishonored, the hotel has been closed down and abandoned since much of the surrounding area's populace has been reduced due to the rat plague. Though visible, the business cannot be explored during the mission High Overseer Campbell, as the front door is locked. However, during the mission House of Pleasure it is possible for Corvo Attano to gain entrance to the facility by performing a task for Slackjaw, who has the key.

Once inside, very little of the establishment can be accessed, but there is a bone charm found near a mattress in the Smoking Room. Also, the building presents a slight hazard, as a medium sized pack of rats dwells on the landing between the ground floor and the one above it. 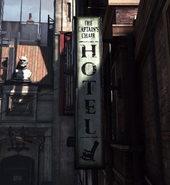 The blocked entry to the staff area.

The Smoking Room of the Captain's Chair Hotel.

The gloomy interior of the upper floors of the abandoned hotel.

The rooftop exit from the Captain's Chair Hotel leading to the Golden Cat.
Add a photo to this gallery
Retrieved from "https://dishonored.fandom.com/wiki/The_Captain%27s_Chair_Hotel?oldid=146109"
Community content is available under CC-BY-SA unless otherwise noted.