The Black Friar is a defunct hotel in the city of Dunwall, encountered during the mission Eminent Domain.

Found in the Legal Disrict Waterfront, the Black Friar is located on Lackrow Boulevard in between Smoke Street and Bloodox Way.

The Black Friar is a tall brick red building consisting of five floors plus an attic. The ground floor consists of two hallways leading to either of the two entrances, a stairway leading up, and the remnants of a small eating area. The floors above consist of a single apartment each.

Prior to the events of The Knife of Dunwall, the Black Friar, like most locations in the Legal District Waterfront, has become abandoned as the residents fled the area. Shortly thereafter, the hotel became the primary base of operations for the Hatters Gang members operating in the Legal District.

When Daud arrives in the area to deal with Arnold Timsh, the City Barrister of Dunwall, the Hatters Gang have already set up defenses around the building, including a wooden fence cutting off direct access to the side entrance, and traps placed inside an abandoned apartment leading to the hotel from Treaver's Close.

Once inside, the bottom three floors can be accessed as they are used by the Hatters as sleeping quarters. The upper two floors as well as the attic are inaccessible, however, due to broken furniture and heavy debris blocking the stairway leading up to them.

Lackrow Boulevard with the Black Friar. 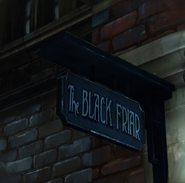 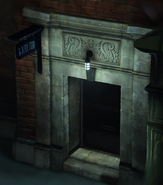 The ornamented front door to the Black Friar.

Entry to the hallway.

Ground floor with the eating area and a door to the courtyard.

A room on the second floor.

A window on the third floor overlooks Lackrow Boulevard.

The stairway leading to the fourth floor and beyond is blocked by debris.

Secret access to the Black Friar is trapped against intruders.

Telltale smoke from the chimneys reveal the hidden occupants.
Add a photo to this gallery
Retrieved from "https://dishonored.fandom.com/wiki/The_Black_Friar?oldid=139499"
Community content is available under CC-BY-SA unless otherwise noted.