"There are few brave enough to laugh in the Outsider's face. But Teague Martin is one."
—The Heart about Martin

Teague Martin is an Overseer of the Abbey of the Everyman, who became an agent for the Loyalists and was instrumental in breaking Corvo Attano out of Coldridge Prison. He was discovered by his fellow Overseers and captured, but was able to escape with Corvo's assistance.

Martin's past is shrouded in mystery, with little information on the specifics of his early life. He was born in Morley, witnessing the Morley Insurrection at a young age[3] and moving to Gristol at some later point.[2] The Heart notes that Martin has both a military and criminal past, saying that he was a soldier and highwayman before becoming an Overseer,[4] and that "[his] crimes weigh heavy on his spirit".[5] Developer Harvey Smith comments that it is possible Martin simply took on his role as an Overseer "off and on at first, [and] then full time" until he convinced the others of his legitimacy as a clergyman. However, in the end, the only definite information is that Martin has a "shady past", a "silver tongue" and has possessed his Overseer position for years, despite his "suspicious origins".[2]

Martin also has some experience with black magic, and is one of the few people who recognizes the mark on Corvo's hand. The extent of Martin's experience with the workings of the Outsider is unknown.

At an unknown point following the assassination of Empress Jessamine Kaldwin, Martin forged an alliance with Farley Havelock and Treavor Pendleton with the aim of reinstating Emily Kaldwin to the throne. To this end, Martin used his extensive personal network to reach out to those who could assist them in freeing Corvo Attano from Coldridge Prison. These machinations resulted in Watch Officer Thorpe providing Corvo with the key to his cell and a sword, and an explosive device being planted in the prison for Corvo to retrieve. However, the plot was uncovered by Martin's fellow Overseers, and he was arrested and placed in the stocks in Holger Square.

During the High Overseer Campbell mission, Corvo finds Martin chained in front of the Office of the High Overseer, being taunted by another Overseer, Jasper. Once Jasper has been dealt with, Corvo releases Martin, who heads to the Hound Pits Pub to continue his work with the Loyalist Conspiracy.

At the Hound Pits Pub, Martin spends most of his time conversing with Havelock and Pendleton. He is praised by Havelock as the Conspiracy's key strategist, and lives up to the name by deciding assassination targets and making good use of Thaddeus Campbell's blackmail journal. He eventually secures the position of High Overseer of the Abbey of the Everyman via blackmail, and uses this position to great affect for the Conspiracy, instructing his Overseer in Dunwall Tower to spy on Lord Regent Hiram Burrows.[6]

Martin is also at the center of the plot to eliminate all evidence of the Conspiracy. He helps Pendleton and Havelock poison Corvo and deal with the other Loyalists, then goes with them to Kingsparrow Island, where they remain for the duration of Dishonored.

Martin's ultimate fate is based on Corvo's chaos level. In low chaos, Martin is found dead at a large table along with Pendleton during Corvo's final mission, presumably poisoned by Havelock.

In high chaos, Martin can be found in front of the Kingsparrow Fort gatehouse attempting to reach Burrows Lighthouse, where Havelock has retreated with Emily. However, the gate has been barricaded by Pendleton, cutting off access. Martin conducts a brief, heated argument with Pendleton before firing on the man, then leaving to regroup and plot how to get past the gates.

If Corvo approaches Martin in his base of operations, Martin will hold a pistol to his own head to prevent Corvo from advancing. He then tells Corvo that while the Conspiracy began with the best of intentions, committing evil acts to attain power "became a habit", and he himself was equally culpable in the Conspiracy's corruption.

While Martin expresses regret at his actions and says that his crimes weigh heavily on his mind, he refuses to give Corvo the privilege of killing him; once Martin finishes his speech, he immediately commits suicide. 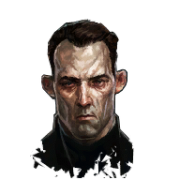 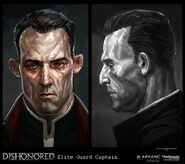 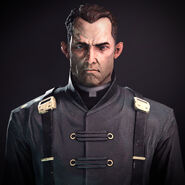 Martin in chains in Holger Square. 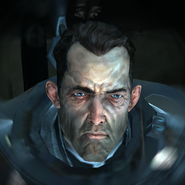 A closeup of Martin's face.

Martin speaks to Corvo after being freed.

Martin in front of the stocks.

Martin arrives at the Hound Pits.

Martin and Havelock in the pub. 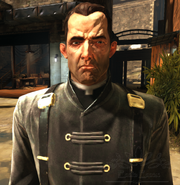 Martin outside the Hound Pits.

Martin at the bar. 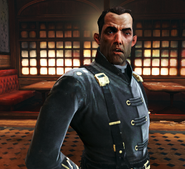 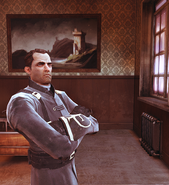 Teague Martin in one of the rooms in the Hound Pits. 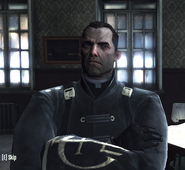 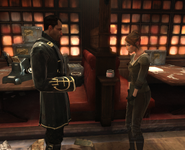 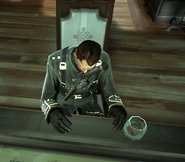 Martin appearing on a tarot card of the Special Edition Tarot Deck.