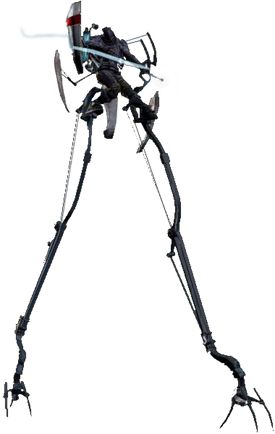 "[T]he tallboy is another government bully, armed with incendiary devices, thickly armored and standing high overhead, looking down at the common people of the city[...]Exquisite? We think not."
—The Exquisite Tallboy[1]

Tallboys, also called stilt walkers, are part of an elite unit of the City Watch. They use a suit that is an amalgamation of spindle-legged armatures, which keeps them out of reach of the rats that swarm Dunwall. Accompanying this, tallboys wear heavy armor plating, which protects them during confrontations.

Tallboys are first encountered at the beginning of Lady Boyle's Last Party, with at least one appearing in each subsequent level, excluding The Light at the End.

Although their offensive power is significant, their movement capacity is limited; a circle-strafe is an effective way to create an opening that allows a few shots to be undertaken.

Each tallboy uses a compound bow and has a spotlight attached to his suit, which he can use to peer into shadows. Tallboys will also react to alerts aired via loudspeaker if they are near enough to hear them, and they can pass through walls of light unharmed unless the walls have been rewired.

Tallboys also have extra shielding in the form of collapsible wooden shields attached to their armor, which protect them from shockwaves.

Following this, due to their leg armatures, tallboys are unaffected by the Devouring Swarm power, and their heavy armor completely protects them against sleep darts and choke-holds. The only opportunity to take a tallboy down non-lethally is with the special arc pylon during the mission The Loyalists - those attempting a "clean run" are advised to avoid them altogether.

Officially referred to as stilt walkers, tallboys were invented by Anton Sokolov in 1836 to be part of the City Watch. It was not until the Lord Regent's reign in 1837 that they really began to be used, and stories of their terror quickly spread.

After Burrows was deposed and his reign ended, tallboys were removed from the Watch and seemed to exist only in childhood stories as icons of horror. Somehow, the Roaring Boys Gang managed to obtain one of the suits, surprising the members of the Watch who had not been trained against this kind of threat.[2]

There are several ways to effectively kill a tallboy:

Concept art of tallboys with no stilts.

Tallboys shoot at weepers in the Void.

A tallboy in the Void.

Front view of a tallboy.

The remains of a tallboy.

A tallboy in front of Dunwall Tower.

A tallboy being vaporized as it walks through a wall of light.

Two tallboys round up a pair of weepers.

A close up image of a tallboy.

A tallboy patrolling a street.

Tallboys in the Void shoot a survivor.

A tallboy up close.

Tarot card of a tallboy.

Tallboy technology used by the Roaring Boys on the first cover of Dishonored: The Wyrmwood Deceit, issue 3. 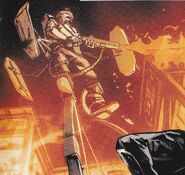 A member of the Roaring Boys utilizing tallboy stilts and shields, as depicted in the comics.