Stinging bolts are a type of crossbow ammunition introduced in Dishonored 2. Stinging bolts are filled with distilled mercury vapor that is injected into the target upon impact. The target will instantly feel an intense itch, which will quickly become a painful burning sensation. They will flee the scene, forgetting and ignoring any suspicious characters.

With the Mercury Vapor Distillation Blueprint and 250 coins, Corvo Attano and Emily Kaldwin can unlock stinging bolts at black market shops, where they can be purchased for 50 coins. They may also be looted from some disarmed booby traps, as well as found around the world.

If Emily or Corvo are hit by a stinging bolt, they will be knocked backwards slightly, but will otherwise be unaffected. 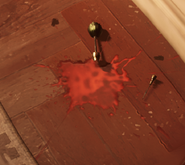 The remnants of a stinging bolt.

A stinging bolt loaded in a booby trap. 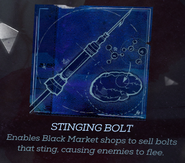 The blueprint allowing the purchase of stinging bolts.

Corvo's crossbow loaded with a stinging bolt.
Add a photo to this gallery

Retrieved from "https://dishonored.fandom.com/wiki/Stinging_Bolts?oldid=165368"
Community content is available under CC-BY-SA unless otherwise noted.