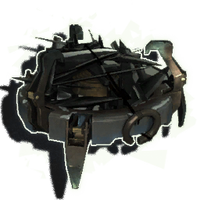 The spring razor (springrazor in later games) is one of the gadgets that is available to Corvo Attano, Emily Kaldwin, and Billie Lurk.

It is a deadly proximity mine that contains a collection of shards and shrapnel including metal blades, shells and bones. Its contents are stored on a circular rim and tightly-wound using metal wires. The mechanism is supported by spring-loaded claws which enable it to be locked onto most surfaces.

The device, when triggered by nearby vibrations, unfolds with an audible click, throwing up a cloud of sharp objects. The trap is potent enough to eviscerate anyone who comes near it, and will, at the very least, cause serious mutilation and disfigurement.

Despite the description saying it is activated by nearby vibrations, the protagonists can run around the spring razor safely without triggering it. They are still damaged by one if standing in its blast radius when something else activates it.

In Dishonored, Corvo can carry five spring razors, or nine with an upgrade. In Dishonored 2 and Death of the Outsider, the protagonists can carry three, and upgrade this number to five. 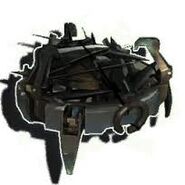 Spring razor attached to a bolt.