Slaughterhouse Row is an industrial district in the city of Dunwall with many slaughterhouses, located in a bay along the Wrenhaven River. It is the setting of the first mission of The Knife of Dunwall, and is featured in the novels Dishonored: The Corroded Man and Dishonored: The Return of Daud.

Slaughterhouse Row began as a few slaughterhouses distancing themselves from the the wealthy districts due to the smell and waste they produced. Independent whaling ships would occasionally bring whales to be slaughtered and barges delivered herds of blood oxen raised in the lands of Gristol.[1] This contributed to provide Dunwall with meat, leather and grease byproducts.

The district saw its heyday as whale oil came into demand in the early 18th century, thanks to Roseburrow's discovery of its uses, his refining process, and Sokolov's creation of oil-powered devices.[2] As the number of slaughterhouses greatly increased in the area, people in surrounding districts started to move away to escape the smell and pollution coming from the factories. Thus, Slaughterhouse Row was able to expand and come to its full potential.[3]

Among these establishments, Rothwild Slaughterhouse stands out as the most modern in the city. Its uses of new Sokolov technologies during the Rat Plague gave it dominance in productivity over the other whale houses. It also used pressured pipes to send the blubber to be refined by a Greaves Refinery before doing the process locally. However, the increasing demand of whale oil under Hiram Burrows's regency and the strenuous working conditions of the laborers eventually led to a strike and a halt in production. The Lord Regent took measures to sanction them and tasked the City Watch to patrol the district and keep the laborers in line, even at the cost of deploying Arc Pylons and Walls of Light.

Other businesses in the district include several Greaves Lightning Oil facilities, among them the Auxiliary Whale Slaughterhouse 5, and the Lost Cause pub near it.[4]

A decade and a half since the end of reign of the Lord Regent, new power technologies developed by the joint works of Sokolov and Piero Joplin at the Academy of Natural Philosophy and increasing costs of whale hunting led to the decline of the whaling industry.[5] As a result Slaughterhouse Row decayed, and parts of the district were left abandoned for years with companies like Greaves closing down old buildings to invest in more modern ones closer to the harbor mouth in the west.[6] Shuttered buildings like the Auxiliary Whale Slaughterhouse 5 were stripped down of any valuables by stragglers, or even used as hideout for suspicious activities.

The district itself consists of a row of slaughterhouses sitting inside a bay and other industrial buildings built along the river. Canals around the slaughterhouses allow access to the Whaling Trawlers and other shipping vessels. The street leading to the Rothwild Slaughterhouse is patrolled by several City Watch officers and Rothwild's own Butchers. An Arc Pylon has been installed in the middle of the street and a Wall of Light defends the entrance to the slaughterhouse's yard.

The yard is also heavily patrolled and an Arc Pylon has been installed near the docks. A series of tanks and pipes collect the processed whale oil refined inside the slaughterhouse. The system was once used to bring hot-pressured oil to the Greaves Refinery in the Rudshore Financial District to be refined, before the Greaves Oil Lighting Company ceased activity.[7] Tracks also allow access to trains directly into the building, and the backside is used to load and unload barges.

The Rothwild Slaughterhouse is divided in several parts. The entrance is for sending and receiving shipments, as well as cutting fishes. A crane system brings the caught whale alive into a large room where it is fitted with electric devices to extract its oil, and then brings it to the killing floor to be slaughtered once dead. A meat locker on one end of the building stores the cut meat, and a refinery on the other side process the harvested oil. A makeshift interrogation chair was installed in the former to force the laborers in strike into submission to Rothwild. Finally in the middle of the slaughterhouse are the Butchers' lockers, the canteen, and the management offices.

Located at the far eastern side of Slaughterhouse Row, this facility was designed to handle the overflow from other slaughterhouses of Greaves Lightning Oil. It was closed by the company a couple of years after the coronation of Empress Emily Kaldwin, focusing their efforts on more modern facilities close to the harbor mouth in the west. It was used as hideout during the Month of Darkness 1851 by the new Whalers gang led by Zhukov and Galia Fleet.[8] The building was then mostly destroyed in the fight that occured on the 15th Day, opposing Emily and Corvo Attano to Zhukov's black magic. What remained of the place was cordoned off by the City Watch for the next 8 months, but conjoined efforts of the guards and Warfare Overseers did not turn either Zhukov's remains or his Twin-bladed Knife. Daud visits the place in 1852 but has no better luck than them.

Slaughterhouse Row from above.

A painting of Slaughterhouse Row

A street in Slaughterhouse Row.

View of Slaughterhouse Row from the rooftops.

A whale trawler on the Wrenhaven River by Slaughterhouse Row.

Area with a rail car.

Area with a rail car.

Warning signs about the plague.

An alley in Slaughterhouse Row.

An area with discarded whale bones.

An abandoned building in Slaughterhouse Row.

A room used by the City Watch.

View from a roof in Slaughterhouse Row.

A building used by the City Watch.

A room in Slaughterhouse Row.

A room with tools.

Walkways over the street.

Entrance to an abandoned building.

Entrance to an apartment. 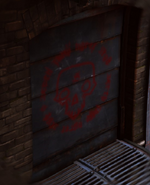 An occult graffiti beneath an abandoned apartment.

Entrance to the Rothwild Slaughterhouse.

Slaughterhouse Row area map.
Add a photo to this gallery

Retrieved from "https://dishonored.fandom.com/wiki/Slaughterhouse_Row?oldid=162103"
Community content is available under CC-BY-SA unless otherwise noted.