Jerome: "Say, would you consider doing a job for me? There's a man whose debt to me is well past due."
Daud: "I'm not a bill collector."
―Jerome, attempting to persuade Daud to deal with Skinflint

Skinflint is a minor character in the Dishonored DLC The Brigmore Witches. He is featured in a side objective given by Jerome during the second mission, The Dead Eels.

Skinflint is a notorious member of the Hatters living in Drapers Ward. He is also known for being a chain-smoker and for playing games of Nancy for coin.

He owes the black marketeer Jerome 50 coins and has failed to settle his debt. Because of this, Jerome attempts to hire the assassin Daud to make an example of him. If Daud accepts, Jerome explains that Skinflint likes to light up in the old canal tunnel near the Millenary Canal. 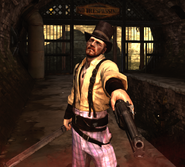 Skinflint by the sewer entrance.

Another version of Skinflint.