Dishonored Wiki
Register
Don't have an account?
Sign In
Advertisement
in: Spoilers, Male Characters, Death of the Outsider Characters,
and 2 more
English

Opera Singer
Shan Yun is a character in Dishonored: Death of the Outsider. He is a famous opera singer from Tyvia who resides in Karnaca's Upper Cyria District. Popularly known as "The Boreal Songbird" to his admirers, he has made several audiographs of various popular songs, such as Along the Oxrush Blooms, To the Heartless, and Release thy Golden Locks, Gloriana, and gained such renown following his relocation to Karnaca that he received a standing ovation from Duke Luca Abele at the Royal Opera House.[1]

In reality, however, he has since fallen into a creative block, and believes that his fans only come to watch him for his looks rather than his singing ability. In a bid to expand his talents, he has since teamed up with the City Administrator Ivan Jacobi to partake in various occult rituals with the Eyeless Gang to communicate with what he believe can restore his creativity -- the Outsider.[2]

Billie Lurk, in her bid to search for the Twin-bladed Knife used to create the Outsider, must search for several keys belonging to Ivan Jacobi and Shan Yun, respectively, to open up a safe box at the Dolores Michaels Deposit & Loan Bank. Shan Yun's key is hidden in a voice activated safe in his house which can only be opened with Yun's voice. Due to his high position in the hierarchy of the Eyeless, Yun has a skyway in his home which directly connects his rooms to the upper floors of the Spector Club.

Shan Yun has a mistress in Karnaca, Eolina Rey. As Yun has recently closed off his home to all admirers, he and Eolina have a secret knock by which his servants can recognize Rey and allow her to enter his mansion.[3]

If Shan Yun is not killed, he flees back to Tyvia after noticing that his key has been stolen - presumably fearing retribution by Dolores Michaels. As a result, Yun cancels all his concerts in Karnaca, disappointing many of his fans.[4] 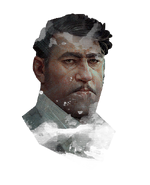 Three Under his Eye.

A poster for one of Yun's concerts.