Samuel Beechworth is the pilot of the riverboat Amaranth, boatman for the Loyalist Conspiracy, and Corvo Attano's source of transportation during the events of Dishonored.

Little is known about Samuel's life outside the Conspiracy. He mentions to Corvo that his father wanted him to become an Overseer, a career that did not suit him well, and that he served in the Navy under Farley Havelock before he began piloting his riverboat, though he doubts Havelock remembers him. He also reveals that he once had a wife (comparing her "moods" to the temperament of the Wrenhaven River), and the Heart notes that Samuel went to sea to forget a hopeless love.[2]

Samuel knows the entirety of the Wrenhaven River down to its last tributaries,[3] and has many scars from the nameless creatures he has encountered on it.[4] He, in turn, claims to have seen strange and magical things on the river, such as mysterious lights and faces in the water.

Samuel acts as a boatman for the Loyalist Conspiracy, transporting Corvo to and from almost all of his main missions. He occasionally provides useful information on the locations Corvo is visiting, informing him of potential roadblocks and areas to be avoided. He is standoffish, rarely entering the Hound Pits Pub; he tells Lydia Brooklaine that because he has been at sea for so long, he cannot sleep in a normal bed, and therefore sleeps in a makeshift hovel near the dock rather than in a room at the pub. According to the Heart, Samuel greatly respects Corvo,[5] and his opinion of the man changes based on Corvo's actions during his missions.

Samuel is the first to predict the betrayal of Havelock, Treavor Pendleton, and Teague Martin, and is forced to poison Corvo at their behest. He only gives Corvo half the poison however, and sends his unconscious body down the river. Samuel then flees the Hound Pits after telling Callista Curnow to use the flare in Emily's Tower if Corvo returns. When Corvo eliminates Havelock's forces at the Hound Pits during The Loyalists, Samuel returns to take him to Kingsparrow Island, where the leaders of the Conspiracy fled with Emily Kaldwin.

Samuel's reactions to Corvo change based on the man's actions, which come to a head on the way to the island. If Corvo follows a low chaos path, Samuel will express great respect for Corvo, commending him on not "losing sight of what really matters" and expressing a wish to see him again before departing the island.

If Corvo follows a path of high chaos, Samuel reacts in one of two different ways: in moderate high chaos, Samuel will express disappointment that Corvo '"went out of [his] way to be brutal," and will say that he never wants to see the man again. At the highest chaos level, Samuel claims that Corvo is the "worst" of all the conspirators and that he is no better than the three traitors. He then fires his gun to alert the guards on the island to Corvo's presence.

In the low chaos ending, Samuel can be seen at the Hound Pits Pub with Corvo and two other men, drinking in celebration. In the high chaos ending, he is seen facing high waves at sea; he will also mention that he may be infected with the plague before departing the Hound Pits.

If Samuel is killed in either high or low chaos, Corvo will visit his grave. If he is not killed, he passes away sometime before 1852.

When taking the skiff to the final mission, Corvo comments, "If old Samuel could see me now." Additionally, a carving made by him can be found in A Long Day in Dunwall in the Imperial Safe Room. 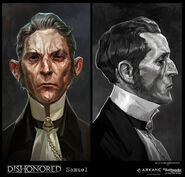 Samuel waits for Corvo outside the sewers.

Samuel outside the Dunwall Sewers.

Samuel stands by his boat. 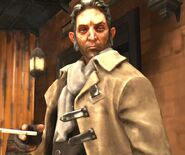 Samuel on his riverboat.

The interior of Samuel's shelter at the Hound Pits Pub.

Samuel waits for Corvo in the Back Yard.

Samuel stands in shallow waters as he waits for Corvo.

Samuel waits for Corvo to return from the Distillery District.

Samuel piloting his boat to the Golden Cat.

Samuel and Emily waiting for Corvo at the end of the House of Pleasure mission.

Samuel arriving to the Hound Pits with Emily.

Samuel tells Corvo about a dream he had.

Samuel's personal touch: a "Welcome" mat in his boat.

Samuel waits by the boat at Kaldwin's Bridge.

Samuel gets ready to take Corvo to his next destination.

Samuel in the Estate District.

Samuel picks Corvo up in his boat at the end of The Loyalists.

Samuel, Corvo, and others celebrating the end of the rat plague in the low chaos ending.

Samuel's carving of a boat found as a souvenir in Dishonored 2.

Samuel's tarot card in the Special Edition Tarot Deck.
Add a photo to this gallery

Retrieved from "https://dishonored.fandom.com/wiki/Samuel_Beechworth?oldid=166963"
Community content is available under CC-BY-SA unless otherwise noted.