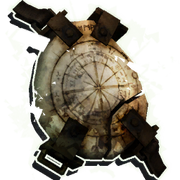 "A thousand years ago there was another city on this spot. The people carved the bones of whales into runes and inscribed them with my Mark."
—The Outsider

Runes are decorated pieces of whalebone that are used to acquire and improve supernatural abilities; the more powerful the ability, the more runes it requires. The Outsider claims that the first runes were created centuries ago by an ancient and long gone civilization, saying that many of the runes in Gristol were found washed up from the river.[1] The crafting of runes, by both natural[2] and supernatural[3] means, has continued throughout the ages into the present day.

There are also corrupt runes, created from dried kelp and algae, pigment made from flowers, and the bones of a human who died in terror and with regrets. These powerful runes allow for spells far beyond those possible with usual runes, but must be balanced out by a normal rune. If this is not so, the spell can go disastrously wrong.[4] It is not known whether or not these runes can be used to upgrade supernatural abilities.

In Dishonored, a maximum of 39 runes are obtainable in a single playthrough, but 58 would be needed to upgrade every ability to Tier II. Therefore, Corvo Attano must assign them according to the approach he favors the most.

In The Knife of Dunwall and The Brigmore Witches, 30 runes are available, yet Daud requires 46 runes to fully upgrade his powers.

In Dishonored 2, 47 runes total may be collected from the maps and more may be crafted with the Craft Runes upgrade for the Bonecharm Crafting ability, while 111 runes are needed to fully upgrade the protagonist's powers. Should Emily Kaldwin or Corvo refuse the Outsider's Mark, they will sell any runes they find to the black market for 200 coin.

*Black market shops do not sell runes in No Powers Mode.

A rune on a shrine in the Void.

Corvo holding a rune found in the Void.

A rune on a shrine behind the house of Granny Rags.

A rune in Galvani's secret room.

A rune hanging above the fireplace in Campbell's meeting room.

A rune in the Overseer's workshop.

A rune beside a note, under the Hound Pits Pub.

A rune in Pratchett's safe.

A rune on the Mad Survivor's shrine.

Corvo finding a rune with the Heart.

Emily holds a rune in the Dishonored 2 gameplay trailer. 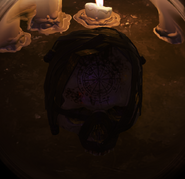 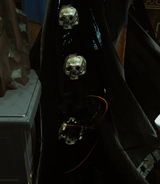 Three corrupt runes being used for a spell.
Add a photo to this gallery

Retrieved from "https://dishonored.fandom.com/wiki/Runes?oldid=166577"
Community content is available under CC-BY-SA unless otherwise noted.