"There once was a sailor from Morley…
who fancied a woman most sorely…
He gave her his cash,
she gave him a rash…
And that’s all… there isn’t no more-ly."
—Rodney, playing a rhyming game with a fellow Bottle Street member.

Rodney is a minor character and thug who appears in Dishonored during the mission High Overseer Campbell.

The red-haired Rodney is a member of the Dunwall criminal faction known as the Bottle Street Gang. As with other members of the gang, Rodney is tasked with maintaining the territories of the gang including the Dunwall Whiskey Distillery which serves as the gang's headquarters.

During the time when Corvo Attano seeks to remove Thaddeus Campbell from power, Rodney is one of a number of Bottle Street members assigned to patrol and defend the Distillery, as well as the still that makes Slackjaw's bootleg version of Sokolov's Elixir.

He is first encountered playing a rhyming game with a fellow gang member. Rodney wins the game with a rhyme about a sailor from Morley, claiming he knows "a hunnert of these old rhymes", because "[his] mummy used to tell 'em at [him]". 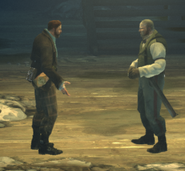 Rodney, on the left, telling riddles. 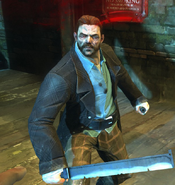 A close up of Rodney. 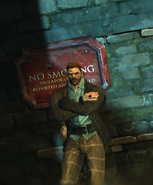 Rodney relaxed against a wall. 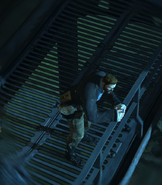 Rodney watching the area below. 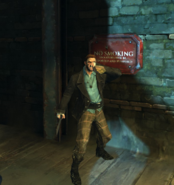 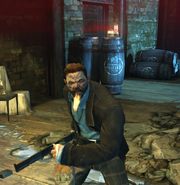 Rodney about to breathe fire.

Rodney wielding his cleaver at Corvo.