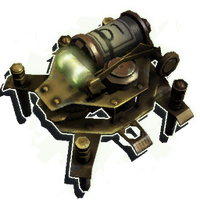 Rewire Tools are used to manipulate the wiring for fuse boxes so that the many technologies in Dunwall and Karnaca function in opposition to their usual programming, assisting Daud, Corvo Attano and Emily Kaldwin.

To rewire an object, locate its fuse box. If the protagonist has a rewire tool in their inventory, activating the fuse box will successfully rewire the appliance. Fuse boxes can easily be located with the upgrade for Dark Vision and Void Gaze that allows the detecting of security systems. While in use, the wires connecting an appliance to its fuse box will be highlighted in blue. In Dishonored and its DLC, if the protagonist activates a fuse box without a rewire tool they will suffer a small amount of damage.

Sound of a fusebox being rewired.

Retrieved from "https://dishonored.fandom.com/wiki/Rewire_Tool?oldid=144233"
Community content is available under CC-BY-SA unless otherwise noted.