Dishonored
Returning Home is the prologue of Dishonored and serves as an introductory mission. It takes place six months before the main events of the game, when Corvo Attano returns to Dunwall from a trip around the Isles.

You have just returned from a journey of several months, visiting the other nations in the Empire to ask for aid in dealing with the Rat Plague. You must deliver their diplomatic response to the Empress, whom you serve as Lord Protector.

Arriving at Dunwall Tower by boat with Geoff Curnow, Corvo briefly hears about the worsening state of affairs in Dunwall as they ascend through the waterlock to the tower grounds. Upon disembarking, Corvo is tasked with delivering a report to Empress Jessamine Kaldwin, who is waiting in the gazebo.

He is greeted by the Empress' daughter and heiress, Emily Kaldwin. Corvo also greets Anton Sokolov and Thaddeus Campbell in the courtyard, where Sokolov is painting Campbell's portrait.

When Corvo arrives at the gazebo, he overhears a brief argument between the Empress and Royal Spymaster Hiram Burrows before Burrows departs. As Burrows passes by, he notes that Corvo has returned two days earlier than expected. Burrows then takes the guards with him as he leaves, stating that the Empress and Corvo should be left alone.

Corvo then delivers his report to the Empress, which explains that the other nations in the Empire plan to blockade Dunwall until the rat plague has passed. She is distressed by this news, and is therefore unaware for several minutes that the guards have vanished.

Assassins suddenly appear, blinking from a nearby rooftop to the gazebo. Corvo fights them off, but is taken by surprise by a second wave and immobilized. He watches helplessly as Daud murders the Empress and the assassins vanish with Emily.

In her dying moments, the Empress asks Corvo to find Emily, saying, "You're the only one who'll know what to do." Burrows, Campbell, and two guards rush to the scene and, finding Corvo holding the Empress' body, accuse him of murder. Corvo is then knocked unconscious and taken to Coldridge Prison.

The boat rises as the waterlock is flooded.

Curnow and Corvo in the waterlock.

The boat Corvo and Curnow take to Dunwall Tower.

A warning regarding the waterlock.

Corvo hugs Emily as he arrives at Dunwall Tower.

Emily runs away to hide from Corvo.

Jessamine and Burrows discussing the plague, with Emily listening.

Jessamine and Emily at the gazebo.

Jessamine Kaldwin's banner on the gazebo.

Corvo fights a Whaler near the gazebo.

Corvo fights a Whaler at the gazebo.

Jessamine holds Emily to protect her from the assassins.

Jessamine comforts Emily after the first wave of assassins.

Daud and the Empress as an assassin uses Pull on Corvo. 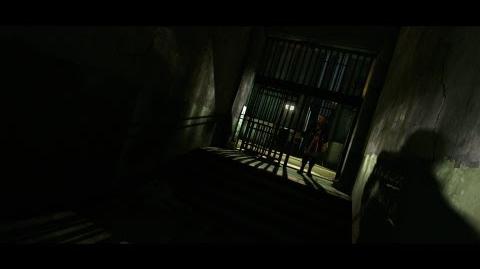