"And that’s Ratter isn’t it? [...] You still got the taste of that Weeper on your tongue, haven’t you?"
—An Overseer patrolling the Kennels with Justice.

Ratter is a minor character and animal who appears in Dishonored during the mission, High Overseer Campbell.

Ratter is one of a number of wolfhounds trained to accompany and fight alongside the Overseers during their patrols throughout Dunwall. He normally is kept within the Kennels at the Office of the High Overseer.

Ratter is encountered in the Kennels when Corvo Attano comes to the Office of the High Overseer to deal with Thaddeus Campbell. 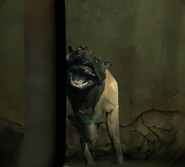 Ratter in his cage. 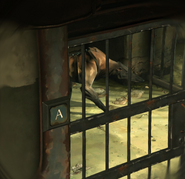