Rats are carriers of the rat plague, spreading the disease which infects the inhabitants of the city of Dunwall.

They can be encountered throughout Dunwall, both in swarms and on their own. Rats are aggressive when in large numbers, with the amount grouped together determining their boldness to attack people, if the target seems appealing enough, including Corvo Attano. While they are cowardly in smaller numbers, in swarms, occurring naturally or supernaturally, they can easily take down and consume a lone watchman in a matter of moments.

Rats congregate in dark places, and wherever corpses can be found. Although they are deterred by the inclusion of bright lights and large gatherings of people, they will notice if the former fails, and will investigate the newly-available areas.

The noise and spread of a pistol is a good way to quickly disperse a crowd of rats, killing some of them in the process. However, it is ill-advised to stay nearby for too long, as the dead rats will respawn with any remaining rats and will swarm at Corvo once more. An easy but time-consuming way to get rid of rats is by standing on higher ground, such as a chair or table, and hacking at the swarm of rats gathering at Corvo's feet. They will be unable to damage Corvo while he can hack freely at them with his sword.

Corvo has two supernatural abilities that take advantage of these animals: Possession and Devouring Swarm, with the latter allowing Corvo to summon a group of rats for a means of attack. Accompanying this, there are whalebone charms which give him the ability to consume or kill different colored rats for mana or health. 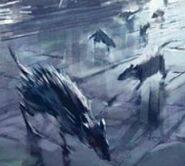 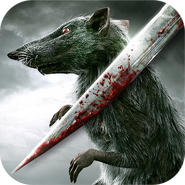 A picture from the game: "Dishonored Rat Assassin."